The Bible says at the time of the end there will be widespread disease epidemics because of mans blatant sin and rebellion against God and his laws that govern sexual behavior and moral behavior. Atlanta Georgia is now in the grips of a widespread Aids Epidemic based on the widespread practice of homosexual/bisexual sex.

Filthy sexual behavior that is powerfully condemned by the word of God for all the obvious reasons. Behavior that involves wading through fecal matter, human excrement, for the sole purpose of perverse sexual gratification. The Bible clearly outlines there will be a consequence for this kind of filthy, ungodly behavior.  And we are now seeing the beginnings of  the consequences for that behavior now in one of the hubs of homosexuality, “Atlanta Georgia”.  You can read the article below.

They can try to claim that it is the result of the lack of testing centers in specific areas but the truth of the matter is perverted sex is the reason why there is an epidemic. If men weren’t inserting their penises in other men’s anuses, anuses that are full of stinking, infectious human waste,for the sole purpose of perverse sexual gratification, their would be no need for testing centers in every location to begin with. Sadly and unfortunately this type of twisted, ungodly sexual behavior, is going to be the catalyst that results in more widespread, incurable, deadly disease epidemics. 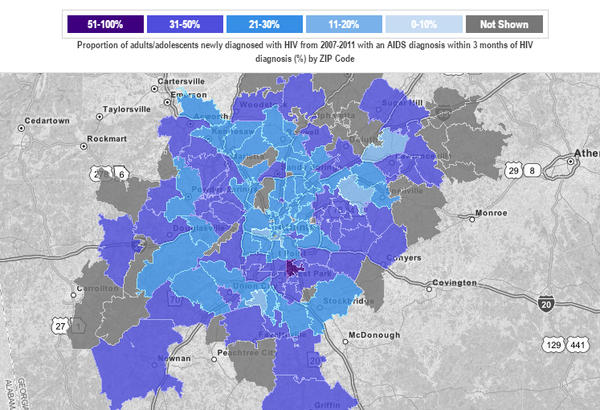 Atlanta is ranked No. 5 among U.S. cities when it comes to the rate of new diagnoses of HIV.

Experts say that’s because routine HIV testing is not offered in the places where most people get their health care. By the time patients are diagnosed in Atlanta, almost one-third have advanced to clinical AIDS.

Since starting a routine testing program in 2013, Grady Hospital has diagnosed an average of two or three patients with HIV every single day.

“This is something that keeps me awake at night in Atlanta,” Dr. Abigail Hankin-Wei said.

She runs Grady’s FOCUS HIV testing program. It’s the only emergency department in the city that offers a HIV test to every patient regardless of why they came in.

“When we diagnose patients with HIV, the first time we are telling them they’ve been infected with HIV, we know that among our patients at Grady, nearly half of them have AIDS the day we diagnose them,” said Hankin-Wei.

There are at least 50 places you can get tested in the Atlanta area.

“Despite that, there are patients who aren’t going to get those tests. And they aren’t going for a decade,” Hankin-Wei said.

Effective treatment can make the risk of HIV transmission almost non-existent, Armstrong said. But nationally, according to the CDC, an estimated 14 percent of people with HIV or AIDS do not know they’re infected.

There are plenty of other reasons people don’t get tested. Experts say stigma, extreme poverty, fear of a positive diagnosis, transportation even. People might think they’re not at risk because they’re in a monogamous relationship.

For all these reasons and more, in 2006, the CDC recommended routine HIV testing.That means offer the test anywhere people get health care.

Almost a decade later, Grady’s Emergency Department is the only one in Atlanta to follow that recommendation. The funding comes from pharmaceutical giant Gilead.

“We’re competing with all the issues Georgia has, for example, with education, for the same pie of funds that the education community does,” O’Neil said.

He’s been practicing medicine long enough to see HIV diagnoses go from a death sentence to a treatable condition, so he’s hopeful. But others say the pace of progress in Georgia is glacial.

Dazon Dixon Diallo is the president of Sister Love, a community-based AIDS treatment and advocacy group in Atlanta.

“We shouldn’t even be talking about AIDS anymore these days, and yet we still are,” Diallo said.

Other states with HIV hotspots have pushed for more aggressive testing initiatives.

“New York has made a priority of the funding of HIV and health care is quite a bit different than a number of states in the south including Georgia,” Catherine Hanssens with the Center for HIV Law and Policy in New York, said.

There, the state passed a law in 2010 requiring doctors to offer the test to patients in all health care settings. In Washington D.C., you can get a rapid HIV test at the DMV.

Ideally, Hanssens said, people should not need to be tested for HIV in emergency rooms. That’s kind of the end result of a broken public health system.

“Frankly if someone is in a medical emergency or they present with a gunshot wound or a knife wound that is probably the very worst and last time that you would ever offer an HIV test,” Hanssens said.

But in Atlanta, that’s where we’re at. On overnight shifts at the emergency department Dr. Hankin-Wei sees a steady stream of patients suffering with non-existent immune systems because of untreated HIV.

“Those patients, we have failed. I want to be clear. We: physicians, lawmakers, public health professionals,” Hankin-Wei said.

She said in the ZIP code around Grady, 8 percent of the population are living with HIV or AIDS. Georgia can do better, said Hankin-Wei, and making routine HIV testing part of health care is the first step.

26 Because of this, God gave them over to shameful lusts. Even their women exchanged natural sexual relations for unnatural ones. 27 In the same way the men also abandoned natural relations with women and were inflamed with lust for one another. Men committed shameful acts with other men, and received in themselves the due penalty for their error.

28 Furthermore, just as they did not think it worthwhile to retain the knowledge of God, so God gave them over to a depraved mind, so that they do what ought not to be done. 29 They have become filled with every kind of wickedness, evil, greed and depravity. They are full of envy, murder, strife, deceit and malice. They are gossips, 30 slanderers, God-haters, insolent, arrogant and boastful; they invent ways of doing evil; they disobey their parents; 31 they have no understanding, no fidelity, no love, no mercy. 32 Although they know God’s righteous decree that those who do such things deserve death, they not only continue to do these very things but also approve of those who practice them.

10 and all the ways that wickedness deceives those who are perishing. They perish because they refused to love the truth and so be saved. 11 For this reason God sends them a powerful delusion so that they will believe the lie 12 and so that all will be condemned who have not believed the truth but have delighted in wickedness.

Another Catholic Priest Charged In A Child Sex Abuse Incident.