Lesbian Couple Sentenced To Life For Torturing And Beating A Child To Death.

They beat the little girl for days until her fragile, bruised and swollen body finally gave up — but the two women showed shock when a judge demanded the rest of their lives in return. 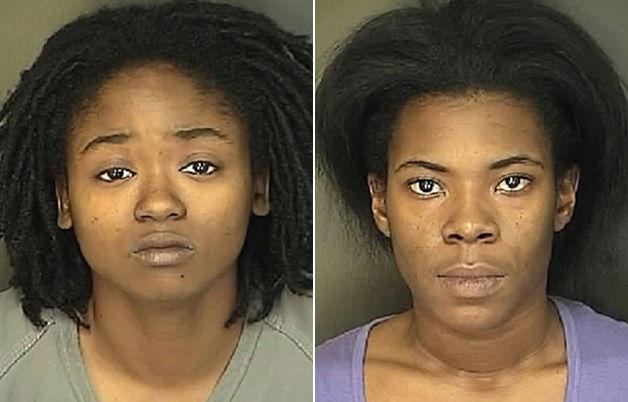 Erica Mae Butts and Shanita Latrice Cunningham, both 25, each collapsed upon hearing that they would serve life in prison for killing 3-year-old Serenity Richardson, Butts’ goddaughter, two years ago.  The sentencing hearing took nearly two hours and ended with court officials dragging Cunningham from the courtroom on a chair and peeling Butts from the floor as she writhed and screamed hysterically.  Butts’ sister threw herself against a bench over and over, shouting, “No!” Her mother refused to leave the courtroom, screaming, “I can’t leave my baby like this!”Eventually, they all left — with officials escorting out Cunningham’s and Butts’ supporters first, then leading Richardson’s family and friends outside.   The two Summerville women, a couple at the time of their arrest, had made their pleas in August. Butts entered an Alford plea, meaning she maintained her innocence but acknowledged that taking her case to trial would likely result in a conviction. Cunningham pleaded guilty.The court treats the two pleas the same, and each woman faced 20 years to life in prison on the charge of homicide by child abuse. The sentencing hearing took place Thursday to allow Serenity’s family travel time from Michigan.

Serenity’s mother, Ieshia Richardson, had been childhood best friends with Butts and had brought her daughter to stay at her godmother’s home on Congaree River Drive in Summerville for about two weeks, beginning in late October 2009.Butts admitted to Summerville police on Nov. 3 that she whipped the girl with a belt for urinating on the floor, and that Serenity had fallen several times in the bathroom.When the child’s breathing became shallow that day, Butts called her own mother in Goose Creek but didn’t tell her what happened. Butts’ mother called 911.

By the time paramedics reached Serenity, she was already dead but had been placed on ice and exposed to bleach in desperate attempts to revive her. Assistant Solicitor Elizabeth Gordon said the girl’s injuries reflected weeks of torture — a duration that matched the amount of time the child had spent with Butts and Cunningham.”There was not a plane of her body that was spared, save the soles of her feet,” Gordon said. Circuit Judge Deadra Jefferson said the photos of Serenity’s injuries showed a child “systematically beaten to death.”

“I’ve never had anything affect me as profoundly as the pictures I’ve viewed of this child,” Jefferson said. She noted that the women could have stopped, could have saved Serenity.Jefferson also suggested that perhaps the women frightened the potty-trained child into urinating uncontrollably. The prosecutor noted that one pelvic injury likely caused Serenity to lose bladder control. Cunningham’s attorney, Cassandra Woosley, described her client as less responsible for the girl’s death than Butts.

Are the life sentences meted out to Serenity Richardson’s killers fair?

Cunningham became pregnant with her own daughter, whom she and Butts cared for, in ninth grade.Cunningham read a letter saying she wants to be a good mother again one day. There is not a day that goes by that I don’t wish I could go back and change everything,” she said.  Butts’ attorney, Melissa Gay, portrayed Cunningham as the “controlling and aggressive” partner in an abusive relationship, while describing Butts as a “meek” woman. Gay said she repeatedly asked Butts for information to implicate Cunningham, but that her client refused to flip on her partner.

Butts said in court that she didn’t know that Serenity was dying, and described her close relationship with Serenity’s mother. Ieshia Richardson had been the only person Butts confided in after she was raped at age 15, and Butts had been in the hospital with Richardson when Richardson gave birth to Serenity, her only child.  “I was responsible for some things, but I would never kill her,” Butts said. Then, practically screaming through her sobs, she turned to Richardson and said, “I will always love you no matter what. … I just want to tell you I’m so, so sorry.”

Addressing the judge, Richardson said she has only clothes, toys and a lock of hair to remind her of her daughter.”All I wanted to do was be good to her and do right to her,” Richardson said. “Nobody deserves what she received.”She asked that her best friend and her best friend’s lover receive the maximum sentence.  I am past being sad about this,” Richardson said. “I am angry. I am very, very angry.” She wore a purple T-shirt with the Serenity prayer printed on it: “God, grant me the serenity to accept the things I cannot change, courage to change the things I can and wisdom to know the difference.”

God’s word is true the warped spiritual condition that fully embracing and practicing this perverted way of life produces is being played out in the headlines daily and in cities around the country, evidenced by the actions of these haters of God, Romans 1:30. Child molestation, child abuse, murder,inventors of evil things, liars, slanderers, etc. The bible clearly outlines in Romans 1:26-32 how this perversion warps the spirit, and in so doing twist the mind which results in abominable evil and rebellion against the commandments and word of God as a whole, clearly outlined in scripture, but the nations gay and pro gay politicians still work feverishly to legalize this ungodly behavior. St John 5:28-29, Romans 2:6-10.

28 And even as they did not like to retain God in their knowledge, God gave them over to a debased mind, to do those things which are not fitting; 29 being filled with all unrighteousness, sexual immorality, wickedness, covetousness, maliciousness; full of envy, murder, strife, deceit, evil-mindedness; they arewhisperers, 30 backbiters, haters of God, violent, proud, boasters, inventors of evil things, disobedient to parents,31 undiscerning, untrustworthy, unloving, unforgiving, unmerciful; 32 who, knowing the righteous judgment of God, that those who practice such things are deserving of death, not only do the same but also approve of those who practice them.

An obvious unmistakeable pattern of deep seated hate for men being manifested in the abuse of little boys, and a hate for little girls who don’t agree with the relationships that the lesbians are involved in is something that is obviously being expressed in the their terrible, violent, abuse of these innocent, defenseless, children.

It’s part of an older lesbian feminist paradigm which says most of the problems in the world come from men.