The Prophesied Rise Of The Strong Man Of Europe?:Former German Defense Minister “Karl Guttenberg” Resurfaces After His Exile In The U.S. 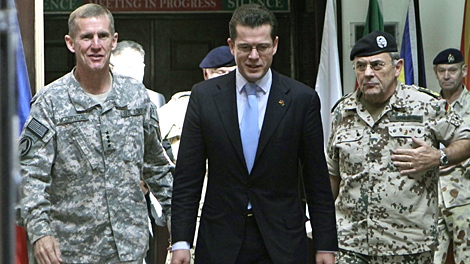 Karl Guttenberg– former “German Defense Minister” and once prominent German political figure has resurfaced after his exile to the U.S.Mr. Guttenberg was shamed after a doctrinal thesis he wrote was  eventually found to be plagiarized/copied.

The embarrassment and distrust he suffered eventually resulted in his departure from his country “Germany” and the political arena. But, he has now resurfaced, with some strong opinions about the present economic climate,like economic tariffs,etc, among other things. One of which is his strong criticism of “German Chancellor—Angela Merkel” and what he describes as her weak leadership.

Karl Guttenberg is an  intelligent and articulate man who reportedly speaks several different languages fluently.The Bible says a strong man will eventually arise in Germany and unite the German people and the European Union more profoundly. The Bible says he will eventually embark on a campaign of world domination.

He will be very charismatic,appealing and convincing. Mr. Guttenberg,it’s also been reported, has argued for a stronger German military presence in trouble spots around the world.As well as a more influential position for Germany in foreign policy affairs.

He certainly seems to fit the description of a strong, charismatic leader, who is prophesied to rise in Germany and on the world scene.The Bible says this man will eventually be heavily influenced by a major false religious figure in the end times.

This religious figure will be instrumental in determining  the foreign policy direction this man takes.And the military objectives he will undertake.I would be interested to know how strong his relationship is with the Pope–if any.

In light of the shame and embarrassment he was subjected to in his country–will establishing a relationship with a loved, and adored religious figure,be just what he needs to endear himself to, and re-establish the trust of the German people?

To accomplish his underlying ambitions,political goals and objectives? He claims to have no interest in running for political office, but how many times have we heard that?Only for it to be later proven false.

He is also reported to be seriously invested in “blockchain technology” and  “crypto currency” and is encouraging many companies to get involved with it.And presently has many companies financially invested. The Bible says this charismatic leader will exercise major influence over world leaders.

The fact that the possibility exists that blockchain  technology has the ability to be controlled by an entity and or small group of individuals from a central location.That can directly affect and impact every nation (literally shutdown any nation which has signed on and is non compliant to a set of rules or an ultimatum) is very troubling and is something that should never be allowed to happen.I think it’s also important to point out this system of buying and selling which is outlined in the Bible will be a cashless system.And block chain-crypto currency is a cashless system as well.

I actually wrote the last part of the previous paragraph before I came across the last video.But the gentleman’s statements in the last video are very interesting and are something to be considered.Considering he’s saying pretty much the same thing.And considering Germany’s push to gain control of the internet this could also be a way and method this man will use to garner major influence and control over nations and word leaders.

When you consider how much business is done and money exchanged over the internet the person or nation in control of it can use it to literally cripple the economies of other nations and use it to force compliance.Not to mention use it to silence free speech.That’s why working to insure no one has control over the internet  is of paramount importance also.Keep your eyes open and pay attention!!! Watch!!

It would be absolutely FOOLISH to allow implementation of such a system of financial control to ever come to fruition!! The last part of the last video where the gentlemen expounds on Daniel 8:23 where it says this man will be skilled in the art of understanding dark sentences/sinister schemes is interesting as well.

Not to mention Revelation 13:16-18.In other words, he will be very diabolical and calculating in terms of his ability to set financial traps and traps in general.Among other diabolical schemes.

Mr. Guttenberg recently stated in an interview that the outcome of the U.S.presidential election has given him a new perspective.I would assume some of what he means is in relation to how President Trump was elected irrespective of all the bad publicity that surrounded him.

I think he may feel if  President Trump can be elected under such harsh circumstances, his chances of being elected as  Chancellor of Germany should be a shoe in.Considering he is still relatively popular among German citizens.

The question is –is this man really the prophesied strong leader that is set rise in Europe?Only time will tell.But one things for certain–he certainly fits the biblical description in many ways.

He needs to be watched and closely monitored.No one really knows who this man will be, until prophetic events begin to unfold.That’s why we need to watch him and few others closely.

Another important factor to consider is all Bible prophesy about the punishment of  the U.S. is all directly related to America’s abominable sins.According to scripture,the only way to insure America wont be the recipient of God’s coming wrath and vengeance is to depart from the abominable sins God warns us about.

This coming world dictator–this strong man of Europe, is prophesied to be a tool God uses to severely punish the U.S. (by allowing  Satan to powerfully influence him) and other nations for their abominable sins. But personally if I  were that man I  wouldn’t fulfill that destiny, when you understand how it all turns out for him.

I would run from it if I were him.Like my physical and spiritual life depended on it.Because they do.Fulfilling that destiny is going to result in him and the False Prophet who instructs him being cast into the Lake Of Fire and tormented day and night for all eternity. But this is what happens when you allow the wrong people to advise and counsel you.America needs to work aggressively to insure certain terribly offensive behaviors that greatly anger God are corrected.

This man also, it’s reported, has a dislike for President Trump and some of his policies.America is prophesied to be brought to its knees by internal curses and plagues because of it’s abominable, perverse sin.And eventually by Nuclear Annihilation in a surprise sneak attack from a trusted foreign power.

Q&A:You Say That Christ Is Going To Use A Sword To Defeat A 200 Million Man Army??? Doe’s That Make Sense And Seem Rational To You?

The Prophesied Rise Of The Strong Man Of Europe?:Former German Defense Minister "Karl Guttenberg" Resurfaces After His Exile In The U.S.

Some Information On Karl Guttenberg.

A Federal Judge Questions Mueller’s Motives In The Trump Investigation. Calls It Overreach And A Witch Hunt In So Many Words.