Is The New October 2014 Jobs Report A Real Indicator Of An Improving Economy? 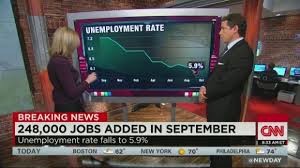 The U.S Economy added 248,000 jobs in the month of September but is that merely a reflection of seasonal hiring based on the fact that a number of those jobs were in the retail sector? Which would certainly make sense considering the fact the holidays are just around the corner and retail hiring would pick up dramatically just to meet those anticipated demands.

Or is it a sure  sign the U.S.Economy  is really improving?  The liberal  media is now touting the recent jobs report as a sign the economy is definitely on the mend, but that’s not surprising coming from a pro Obama liberal media that has been notorious for painting a rosy  economic picture of a failing economy to help the approval ratings of Presidents they support and who’s policies they champion.

But what is the real truth and what does the real U.S. economic picture look like absent  all the liberal media  bias, fact twisting and hyperbole? The article below gives a more honest and realistic view of the present state of the U.S. Economy.

Whenever a new government report comes out that gives the left-leaning media any reason to raise a cheer for the Obama administration, you can bet the progressive chorus will begin to sing the praises of their champion.

And so it goes after today’s release of the latest jobs creation and unemployment report from the Labor Department.

Right on cue, outlets such as The Huffington Post sound a triumphant trumpet for the latest figures — 248,000 jobs created last month, with the country’s unemployment rate falling to 5.9%.

Here’s how The Huffington Post helped to lead the cheerleading for Obama, citing a report by the reliably pro-administration Associated Press:

The rate fell from 6.1 percent in August and is now close to 5.5 percent, which many economists consider a healthy level.

The improved figures come after President Barack Obama touted his administration’s economic achievements in a speech Thursday. The economy is the top issue in voters’ minds as the November elections near.

So, right after the president’s speech at Northwestern University in which he extolled the virtues of his economic policies and programs…right when polling shows that the economy and the jobs market are at the top of most voters’ list of concerns…right as the real pressure mounts on vulnerable Democrats heading into crucial midterm elections — we get this “mostly positive” government report.

Well, let’s look a little deeper than the glossy surface reflection of Obama’s self-congratulatory talking points — the ones that make for the kind of glib arguments that miss the underlying fundamentals — the fundamentals showing a perilous weakness.

Beneath those top-line talking-point numbers — new jobs, lower unemployment — beneath those figures lies a much-more telling statistic. The labor force participation rate — the not-so-rosy number that Obama and his cheerleaders in the media don’t want to shout about.

Zerohedge.com reveals the ugly truth — that, once again last month, a ton of folks dropped out of the U.S. labor market. They became a drain on the system rather than contributors to it. Instead of paying taxes, they’ll suck up government benefits funded from tax revenues paid by others.

While by now everyone should know the answer, for those curious why the US unemployment rate just slid once more to a meager 5.9%, the lowest print since the summer of 2008, the answer is the same one we have shown every month since 2010: the collapse in the labor force participation rate, which in September slide from an already three decade low 62.8% to 62.7% – the lowest in over 36 years, matching the February 1978 lows.

And while according to the Household Survey, 232K people found jobs, what is more disturbing is that the people not in the labor force, rose to a new record high, increasing by 315,000 to 92.6 million!

So, far more people last month left the labor force than joined or rejoined it. Far more Americans gave up on finding work and dropped out.

The truth is, America is working less…even as Obama is gloating more.

A Nationwide Racist White Supremacist Element Within The Ranks Of Law Enforcement?