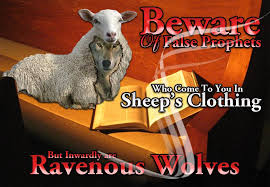 15 Beware of false prophets, which come to you in sheep’s clothing, but inwardly they are ravening wolves.

16 Ye shall know them by their fruits. Do men gather grapes of thorns, or figs of thistles?

There are so many self proclaimed ministers today who are saturating the landscape with false doctrines, teaching  biblically contrasting doctrines  that promote an environment of defiance and rebellion against the commandments and word of God as a whole. And the fruits of those false doctrines and teachings are on full display in these churches and society as whole.

Lying, murder, slander, perverse sexual behavior, theft etc. This biblically contrasting behavior is normally justified by that same false Christian doctrine that essentially teaches that all one needs to do is verbally accept Jesus Christ as their savior and  there is no need to do anything further.  The false doctrine reinforces the belief that because Christ death has  essentially paid the price, the death penalty, there is  nothing further to do.  But when you examine scripture you begin to clearly see that such teachings are a complete facade and are not at all biblically supported.

The question is  in the face of such blatant, widespread deception. Resulting from gross biblical misinterpretation, that produces gross rank hypocrisy,and ultimately physical and spiritual destruction. What does God plan to do to the false ministers who regularly, grossly misinterpret the Bible, for greedy gain and to intentionally deceive and lead astray? And who are the primary sources of this gross deception? The truth of the matter is God takes the teaching of his word very, very, very seriously and requires that anyone who teaches it has a thorough understanding of it, and  is thoroughly versed in it, and obeys it themselves by keeping the commandments and the word as a whole.

Because when you don’t understand it, and are not thoroughly versed in it, and don’t obey it, you will never be able to properly interpret it. And the result is what you see now  gross biblical misinterpretation, which results in gross deception, which results in gross rebellion, which ultimately results in physical and spiritual condemnation when judged. And because of this God promises to destroy those false ministers when he pours out his wrath on the nations and when they stand before him to be judged. This is something that is clearly and powerfully outlined by the Bible. Let’s examine God’s word to get a clear understanding of the fate of those that deceitfully mishandle, misinterpret, and exploit his word to deceive, lead astray, and simply for monetary gain.

Midway through the audio I say the fruits of the spirit are outlined in Romans 5:19-24, but what I meant was Galatians 5:19-24. I was just speaking a little too fast. Sorry if I confused anyone. I also mention that the U.S. had ownership of the Panama and  Suez Canal but what I meant to say was the U.S. had control of the Panama Canal, and the U.K. had control of the Suez Canal, both major sea gates.

Ephesians 2:8-9 – By Grace Are You Saved Through Faith

Audio, The Bible The Prophesied Destruction Of False Ministers.

How Did We Get The Bible?: Did The Catholic Church Canonize The Bible?

How To Pray Dynamically For Results.

Now We Know How God Parted The Red Sea.