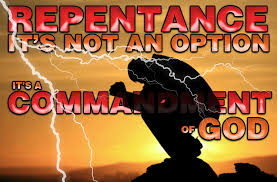 What is repentance and how does the Bible define it? There have been so many self proclaimed ministers of God that have offered their own personal interpretations or opinions about what repentance is. But most or nearly all are not consistent with the word of God. I have heard many of these self proclaimed ministers claim that a verbal acceptance of Jesus Christ can be defined as repentance but this is wrong and not consistent with the word of God.

I recall talking to  a false minister years ago who when I asked him what repentance was he responded by saying  repentance can be defined as going to a good church that emphasized not to drink, but as most of these self proclaimed ministers are he was completely wrong.

It’s not a sin to drink, there is an account in Genesis 9:21 of Noah being drunk, but yet he was considered one of the most righteous men in the Bible. Christ said in Matthew 11:19 that the son of man came eating and drinking and they called him winebibber or a wino and a friend of publicans and sinners but he was sinless. It also says in 1 Timothy 5:23 to drink no longer water but have a little wine for your stomachs sake and oft infirmities.

Paul emphasizes  in 1 Corinthians 6:12 that all things are lawful for him but he wont be brought under the power of anything. Which simply means if it is legal it is lawful for him, in that he can do what he wants to do, but he wont allow anything to control him, self control and moderation is what’s being emphasized by him in all things. So if a verbal acceptance of Christ or refraining from drinking  can not be defined as repentance or righteousness how do we determine it?

How do we define what righteousness and repentance are? Let’s examine Gods word for the truth. Let me start out by saying this is pretty lengthy audio I felt it necessary to be thorough as it relates to this topic, and even with that said there were still a number of relevant scriptures left out  to minimize the length of the audio.

In this audio I mention that homosexuality and lesbianism are punishable by death in Jude 1:9-11 but what I meant was Jude 1:7-11 sorry if I confused anyone.  I also make the statement in this audio that a senator in  New Jersey legalized same sex marriage but he actually presided over marriage ceremonies I don’t think he legalized homosexual marriage himself.

I also emphasize in this audio that Christ says nothing that goes into the man can defile him. Allow me to clarify myself  lest sexual deviants twist God’s word to make it sound like that is in reference to inserting penis in stinking, toxic, caustic anus and fecal matter, which is absolutely ridiculous and not consistent with the word of God.

Homosexuality is condemned throughout the Bible and it says that it is punishable by death, Leviticus 18:22, Leviticus 20:13, Romans 1:26-32, Romans 1:32.  What Christ means by that statement is nothing that enters into the mans mouth can defile him in relation to food, or drink ,or smoke is what that means. I also used the term irregardless in the audio when addressing a topic but what I obviously meant regardless sorry just speaking a little too fast.

It is not in relation to what enters into his anus in terms of penis in anus or even penis in mouth, that needs to be clarified. Lest perverts, sexual deviants/haters of God try and twist God’s word to make it appear to be saying something  that it is not something which they do consistently.

Listen: Repentance What Is It  Exactly

Listen: Repentance What Is It  Exactly

Audio, The Bible What Is Repentance, What Is Rigtheousness

Q&A: Nobody Really Knows For Sure God May Actually Be A Woman.How Do You Know For Certain?

Featured-Q&A: Why Do You Judge Others When The Bible Condemns Judging? Matthew 7:1-3

Ascension To Heaven Or Resurrection To Judgment?