About The Movie “Exodus: God’s And Kings”.

In Articles, The Bible 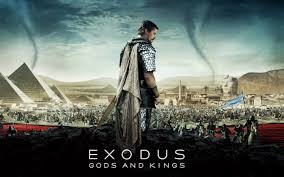 Unfortunately, relying on Atheist, Sexual Deviants and God Haters, which is what mostly comprises the makeup of those that oversee the production of most movies in Hollywood. Including movies relating to the Bible and biblical characters.

You can always expect intentionally inaccurate, outrageous depictions, of movies relating to the Bible and Bible-based characters. Just as the most recent major movie production  “Noah’ was a distorted, error-filled, grossly inaccurate depiction, of the biblical character Noah, and the events that surrounded his life.

The movie  “Exodus: God’s And Kings” is the same grossly inaccurate disappointment. And appears to be the producers conjured up version of biblical events as opposed to an accurate Bible-based depiction of Moses and the events surrounding his life.

Both movies appear to be obvious attempts to completely distort and discredit God, the Bible, and biblical patriarchs. But as I said, unfortunately when you rely on Atheist, Sexual Deviants, and God Haters, many who run and oversee these kinds of movie productions, this is the kind completely inaccurate, mythical, blasphemous garbage you can expect.

As well as any other Hollywood production as it relates to the Bible and Bible-based characters like you would avoid the Ebola Virus. Because you will be misinformed deceived, offended, and thoroughly disappointed. For instance, the first fallacy in the movie takes place when it depicts God as a weird, creepy, pre-teen boy speaking directly to Moses as the bush burns alone in the background.

As opposed to the angel of God appearing as a flame of fire in the midst of the bush and then  God himself speaking directly from the midst of the burning bush which is the accurate biblical account– Exodus Chapters 3 and 4.  It also never shows Moses removing his shoes in the presence of the burning bush as he was instructed by God but rather depicts Moses stuck in mud after a mudslide while the young boy speaks to Moses as if the young boy is God. While Moses is trapped and encased in mud?!

An event or events that are completely unbiblical, grossly inaccurate, and simply never happened. I immediately began to get very upset when I saw where all this was heading. I knew from that point forward I was about to be taken on a false, grossly inaccurate, blasphemous, fairy tale ride. And my feelings proved to be true.

It’s as if the movie and or its producers were trying to send a subtle, covert, subliminal, Satan-inspired, humanistic message, that God is weak, feeble and non- existent. And men are in fact God’s themselves. This is not surprising because liberal humanists have always tried to deceive mankind throughout history into buying into that false Satan-inspired way of thinking.

And have always sought to exalt themselves (with all the evil and filth that goes along with that proud, arrogant, satanic mindset) above God. As you can imagine the movie pretty much goes downhill from there in terms of biblical accuracy, time sequences, etc. And continued to be a ridiculous, grossly inaccurate, error-filled account and depiction of Moses and the events that surrounded his life.

The movie also gives the impression at one point that God instructed Moses to take up the sword to defeat  Pharaoh and secure the freedom and release of  Israel. Which is also absolutely unbiblical and completely inaccurate. God secured the freedom and release of Israel through mighty miracles notice –Exodus Chapters 3 through 13 . It was important to God that he be glorified and the primary focus in the whole process of liberating Israel. As opposed to a carnal man in Moses being the primary focus.

The movie also depicts God as vindictive, hateful and uncaring, and paints a picture of a defiant Moses who is uncooperative and disrespectful in many instances. Again which is completely unbiblical and inaccurate. The Bible also says the Israelite’s left Egypt with great possessions because the Egyptians feared them greatly, so gave them all they needed. As opposed to the Exodus being rushed and the Israelite’s leaving empty-handed which is how this movie depicted the Exodus of Israel.

There were also examples of plagues, like the plague of frogs, hail, locust, and others. But not in the proper context and in line with biblical accounts of Moses first coming to Pharaoh as instructed by God and informing him when and how the plagues would take place.  But only a series of events without time sequence and never correlating with how the Bible described the events unfolding.

The young pre-teen boy who represented God would make his entrance at certain points in the movie and provide Moses with vague descriptions and information. But again this does not at all corroborate biblical accounts of how things played out. There was no literal parting of the Red Sea by Moses. There was no angel of the lord blocking the way of Pharaoh and his armies with a fiery wall of fire as described in the Bible. There were so many inaccuracies and discrepancies that left you scratching your head and wondering where the script and or plot originated from, and what was the motivation behind it?

The movie “Exodus:God’s And Kings” was simply horrible and blasphemous and simply amounted to a disrespect and completely fraudulent and inaccurate portrayal of God, his servant, and his word. If you are looking for an inaccurate, absolutely false, mythical fairy tale,  about Moses and his life’s events then you should be salivating at the chance to feast your eyes on this blasphemous portrayal of God and Moses.

But If you are looking for an accurate Bible-based depiction of Moses and the events that surrounded his life. Do yourself a favor and save your money because if not and you have knowledge of the true biblical account of Moses, you will be offended and thoroughly disappointed. Because you won’t find that accurate biblical account of Moses and his life in “Exodus: God’s And Kings”.

Rain And Powerful Winds Slam San Francisco California And Knock Out Power To Over 300,000.