Is President Elect Donald Trumps Self Professed Conservative Position And Views With The Naming Of “Rex Tillerson As Secretary Of State” Vanishing Right Before Our Eyes? 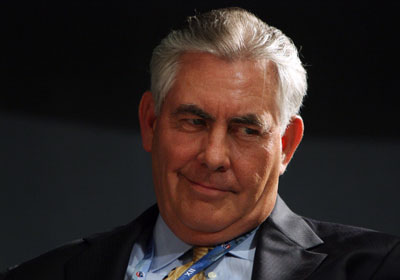 President Elect Donald Trumps recent decision to name Rex Tillerson to the office of Secretary Of State has sparked criticism and controversy and rightfully so. Rex Tillerson  in actuality may be the biggest ally  liberals have in their cabinet for the abortion and LGBT Agenda.

Rex Tillerson its being reported was instrumental in opening up the Boy Scouts Of America to homosexuals,despite the already alarming increase of sexual abuse cases by the hands of homosexual men against boys in the organization.

I find the consideration of such an appointment quite disturbing and alarming based on available information. What place does a person with such destructive liberal views have in a self professed conservative Trump administration?

And why does it appear President Elect Trump is rubbing elbows with some of the wealthiest, liberal homosexuals in the country? The question needs to be asked is President Elect Donald Trump setting a precedent with these kinds of liberal appointments? Has the conservative party been bamboozled? Only time will tell where the President Elect is going with this.

But the decision to name a man with such destructive liberal views, to such a powerful position in his administration does not look right, nor will it, or should it, go over well with other staunch conservatives.Conservatives should fight hard to insure these kinds of appointments are never confirmed. A man with such destructive, liberal views, being the head of such a powerful position and office will not bode well for this nation and it’s citizens.

Just as God can raise a man to prominence and power to accomplish his objectives, Satan can and has been instrumental in working to thwart God’s plans by using men to deceive those same men God has raised to power. It happened with King Solomon, the ancient nation of Israel and throughout history.

But God does not interfere with the rulers ability to make their own decisions and follow their own path. But he does issue stern warning, informing rulers of the physical,spiritual and national consequences of their actions. President elect Trump has been warned but the direction he chooses to take is up to him. But the consequences (if his actions threaten the physical and spiritual lives of the citizens of this nation) he will be equally responsible for.

If he allows the intoxicating allure of widespread acceptance and more money and power, to be the foundation that forms his policies, as opposed to what’s right in the eyes of God to be what forms the more critical policies, he and everyone else are about to be in for a rude awakening.

He will find out that real power is not in the appointment of generals, or military might, but in the awesome unmatched power of God, who has even the power of the elements at his command and disposal, and who scoffs at the military might of all nations combined as if they were less nothing….Isaiah 40:17….Let’s pray that he follows the path that pleases God as opposed to the path of  appeasement for selfish personal gain, and widespread acceptance,that greatly angers God, for his sake and for the sake of the citizens of this nation.

17 All nations before him are as nothing; and they are counted to him less than nothing, and vanity.

Is President Elect Donald Trumps Self Professed Conservative Position And Views With The Naming Of Rex Tillerson As Secretary Of State Vanishing Right Before Our Eyes?

Is President Obama Trying To Use The Deceptive False Narrative Of Russians Hacking The Presidential Election As A Means To Invalidate Donald Trumps Win? Makes Sense To Me.