The American economy roared into overdrive last month, the Labor Department reported Friday, extending the longest streak of job growth on record and echoing other recent signs of strength.

The unemployment rate fell to 3.8 percent, its lowest level since the heady days of the dot-com boom in early 2000.

The net increase of 223,000 jobs reflected healthy gains in a broad range of industries, from manufacturing and transportation to health care and retailing.

The monthly numbers are traditionally kept under wraps by the Labor Department until their release, under rules meant to keep officials from influencing markets by discussing them publicly beforehand or immediately afterward.

But in an unusual departure from protocol, President Trump hinted on Twitter more than an hour before the announcement that positive data was in store. “Looking forward to seeing the employment numbers at 8:30 this morning,” he tweeted.

It was the 92nd consecutive month of job creation. Most economists expect the momentum to continue, but a deeper drop in the unemployment rate or a big bump up in average hourly earnings would stoke fears of inflation and, in turn, a more hawkish Federal Reserve.

Fed policymakers are almost certain to raise interest rates when they meet this month, with at least one additional increase likely in the second half of 2018.

In May, average hourly earnings rose slightly, lifting the year-on-year gain to 2.7 percent. That’s healthy enough to assuage fears that wages are stagnating but not so strong as to change the Fed’s expected course.

“It was a stronger report than expected, but it wasn’t so hot as to lead the Fed to believe it’s behind the curve,” said Michael Gapen, chief United States economist at Barclays, adding that the Fed’s plans shouldn’t worry stock-market bulls. “It will keep the Fed on its gradual normalization path.”

Indeed, the stock market rallied in the wake of the news. The Standard & Poor’s 500-stock index finished the day up more than 1 percent. Bond prices dipped slightly as traders braced for the possibility of faster economic growth, lifting the yield on benchmark 10-year Treasury bonds to 2.9 percent.

Mr. Gapen believes the unemployment rate could sink as low as 3 percent by the end of 2019. That would bring it to levels last seen in 1953, the height of the economic boom after World War II.

The only negative in the report was a slight drop in the share of Americans who are either working or looking for a job, paced by a 170,000 increase in the number of people not in the labor force. That, in turn, put downward pressure on the unemployment rate, which sank from 3.9 percent in April.

Still, the overall report painted a picture of a robust labor market by any measure. Unemployment among African-Americans fell to 5.9 percent from 6.6 percent in April, the lowest since the Labor Department began breaking out unemployment by race in 1972. Among college graduates, the unemployment rate is 2 percent, while it stands at 3.9 percent for workers with a high school diploma.

“It was certainly a good number, with some weather-related bounce-back in construction,” said Diane Swonk, an economist with Grant Thornton. 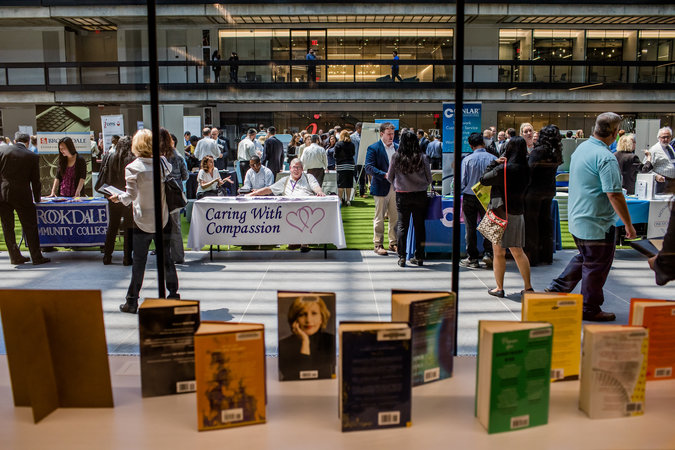 A jobs fair last month in Holmdel, N.J., viewed from the township library. Average earnings last month rose by 8 cents an hour and are up 2.7 percent over the past year.CreditStephen Speranza for The New York Times.

Ms. Swonk said the great conundrum in the current economic environment was why wage growth had been so modest. After all, a tighter labor market should prompt employers to raise salaries to keep the workers they have and lure new ones, right? 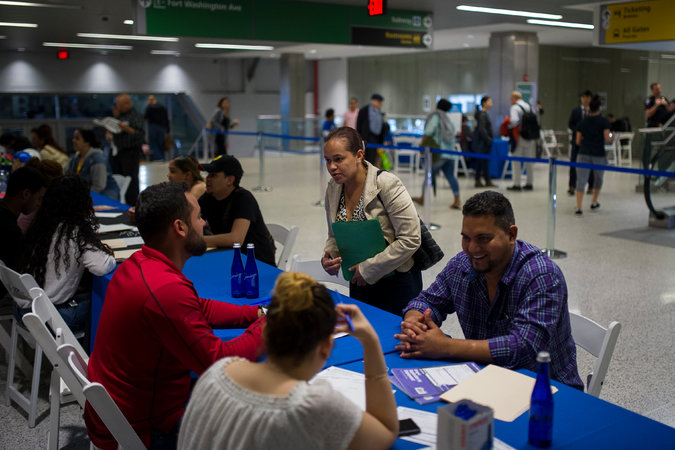 In theory, yes, but in practice it hasn’t been working out that way — and everything from slow productivity growth to the decline of unions and digital disruption has been cited as a reason.

“This is the last shoe to drop in the labor market,” said Torsten Slok, chief international economist at Deutsche Bank. “It’s just a matter of time before wages start going up more strongly, but there’s frustration that it hasn’t happened yet, even though unemployment is the lowest it has been in almost 18 years.”

Besides the other potential causes, Mr. Slok has one of his own: While job switchers are being rewarded with raises, people who stay where they are not. Nearly 15 percent of what he calls “job stayers” saw no increase in wages in the past 12 months. At comparable periods in past economic cycles, that share was more like 10 percent.

“If you just stay around, you have less bargaining power,” Mr. Slok said.

Back From the Sidelines?

Sectors like construction, energy, transportation and hospitals have been especially tight, Ms. Swonk said, with some employers offering signing bonuses to lure workers. For evidence of the trend, she is watching teenage unemployment, which was 12.8 percent last month. In April, it stood at 12.9 percent, down from 14.7 percent in April 2017.

The teenage unemployment rate is significant because this cohort is a prime beneficiary of tight labor markets, Ms. Swonk explained. When there was more slack in the system, teenagers had to compete with 50-somethings for scarce jobs. Now, as the latter group finds higher-paying positions, young workers are filling the gap.

In some regions, workers have grown particularly scarce, forcing companies to pony up to compete for new hires. Union Pacific, the railroad giant, has long struggled to find mechanics, electricians and other skilled trade workers. But now it is having trouble filling even unskilled positions in some areas.

In Council Bluffs, Iowa, where the unemployment rate is under 3 percent, Union Pacific has started offering $20,000 in hiring incentives for train crews — a job requiring no experience or education beyond a high school diploma. In some cases, the company isn’t even waiting for students to graduate to start the recruiting process.

“We have communities where we work where the unemployment rate is a percent and a half,” said Lance Fritz, Union Pacific’s chairman and chief executive. “Finding people to do work there is mostly about getting them in high school and making them aware of the career path so that when they graduate and are in the work force, we get them.”

In Wisconsin, workers like Chris Bogan are benefiting from a surprisingly tight labor market. When he was laid off last fall by Appleton Coated, a paper mill, he feared the worst. As his family’s main breadwinner, Mr. Bogan was earning $28.66 per hour, a solidly middle-class wage in the Neenah area, which The New York Times reported on in November.

As it turned out, a shortage of workers in one of the industries recently cited in the Fed’s Beige Book economic survey — trucking — came to Mr. Bogan’s rescue. The day the mill shut, he signed up for a course at Fox Valley Technical College to get a license to drive trucks. And the day after he graduated, he landed a job at a local trucking company.

“I didn’t wait around,” Mr. Bogan said. “I graduated on a Thursday night and went to the trucking company office on Friday morning.”

Trucking accounted for nearly 7,000 of the jobs gained nationwide last month. And the demand for workers that Mr. Bogan encountered is part of the larger economic picture in Wisconsin, which has one of the nation’s lowest unemployment rates. The jobless rate there stands at 2.8 percent, down from 3.3 percent a year ago.

In fact, after the mill resumed production and Mr. Bogan got a call asking if he’d like to come back, he politely declined. Under a Teamsters union contract, Mr. Bogan’s employer covers all of the cost of his health insurance, so he’s essentially earning the same take-home pay as before.

“Things are going pretty well,” he said. “I love it. Instead of just watching that machine turning, I’m outside, and it’s different every day.”

The Push For The Advancement Of Socialism In America: Could It Cultivate The Repressive,Oppressive, Totalitarian, Bloody & Murderous Fruits And Examples Of Marxism?

Self Confessed Pedophile “Nathan Larson”Cleared To Run For Congress.