Top Democrats slam Pete Buttigieg for failing to stop ‘airmageddon’ and demand he imposes fines of $55,000 for EACH passenger on cancelled flights as 312 more are axed and 4,378 are delayed

Transportation Secretary Pete Buttigieg is under fire from leading figures in his own party for failing to stop ‘airmageddon’ flight hell as travel chaos continued through the Fourth of July weekend.

More than 312 flights were canceled and 4,378 were delayed by Sunday evening during the busiest holiday weekend since the pandemic began.

Another 88 have so-far been canceled for Monday – although that number will likely rise exponentially as July 4 travel commences, affecting thousands of Americans returning from a long weekend away.

Sen. Bernie Sanders and Rep. Ro Khanna of California both called for Buttigieg to take action well ahead of the holiday weekend, according to letters they sent out last week.

As travel chaos escalated over the weekend as feared, Sanders took to Twitter to once again called out Buttigieg to set a plan in motion.

More than 312 flights were canceled and 4,378 were delayed by Sunday evening during the busiest holiday weekend since the pandemic began

Travelers arrive an air train at Newark Liberty Airport on Sunday. Another 88 have so-far been canceled for Monday – although that number will likely rise exponentially as July 4 travel commences, affecting thousands of Americans returning from a long weekend away
Long Lines At San Francisco Airport Due To Summer Travel Surges

‘The Department’s incremental response so far has been lacking the urgency, imagination, and boldness to meet the moment and needs of the American people,’ he wrote.

Khanna told The American Prospect: ‘Buttigieg needs to make clear that he has the authority to go after the airlines for unfair and deceptive practices. He needs to lay out a framework for what the consequences will be for canceled flights, understaffing, and misrepresentations to passengers.’

Buttigieg, who previously called on airlines to get in shape before the weekend, appeared to give up on getting things under control yesterday as he told Americans to follow his lead and claim compensation over the canceled flights.

‘Airlines offer miles as compensation for some travel issues, and you can often negotiate on this,’ tweeted Buttigieg, who said he got back $112.07 over his canceled flight on Friday after he was initially offered about $30 back.

‘Sometimes an airline will offer you points or miles as compensation, but you are entitled to a cash refund when your flight is canceled.’

Delta has taken to drastic measures to quell customer dissatisfaction, with passengers from one overbooked Delta flight reporting that the airline offered eight passengers $10,000 each to forfeit their seats last week.

Around 48 million people are expected to travel this weekend with AAA estimating 3.5million would take to the air. But the actual number of passengers flying may be dramatically higher as, the Transportation Security Administration screened more than 2.1 million travelers at airports on Saturday alone.

Since the hectic Juneteenth travel weekend, the U.S. has seen more than 12,000 flights cancelled, according to FlightAware.

In addition to airport chaos and heavy traffic, holiday travelers will have to contend with higher prices. Average gas prices have soared 56 percent from a year ago, mid-range hotel prices have increased 23 percent, and average lowest airfares are up 14 percent.

In total, AAA projects that 47.9 million Americans will travel for the Fourth this year, up 3.7 percent from last year and close to the historic peak reached in 2019, before the pandemic struck. 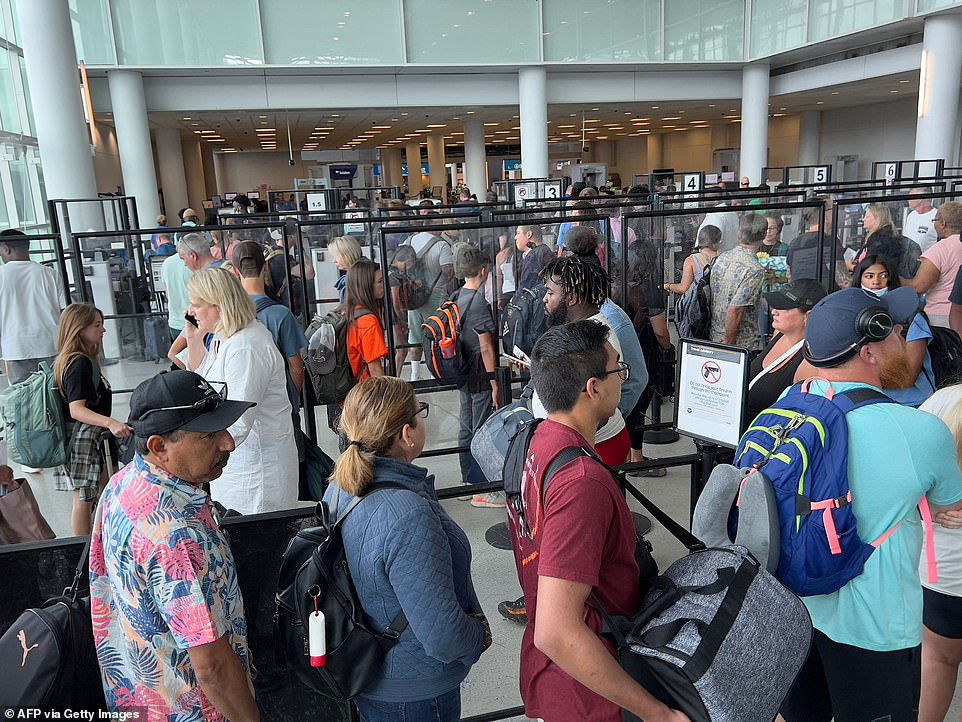 At least 312 flights were canceled by 11 p.m. Sunday night and a staggering 4,244 delayed, according to FlightAware , which reported that by the end of Saturday, 654 US flights were called off and 5,860 were delayed 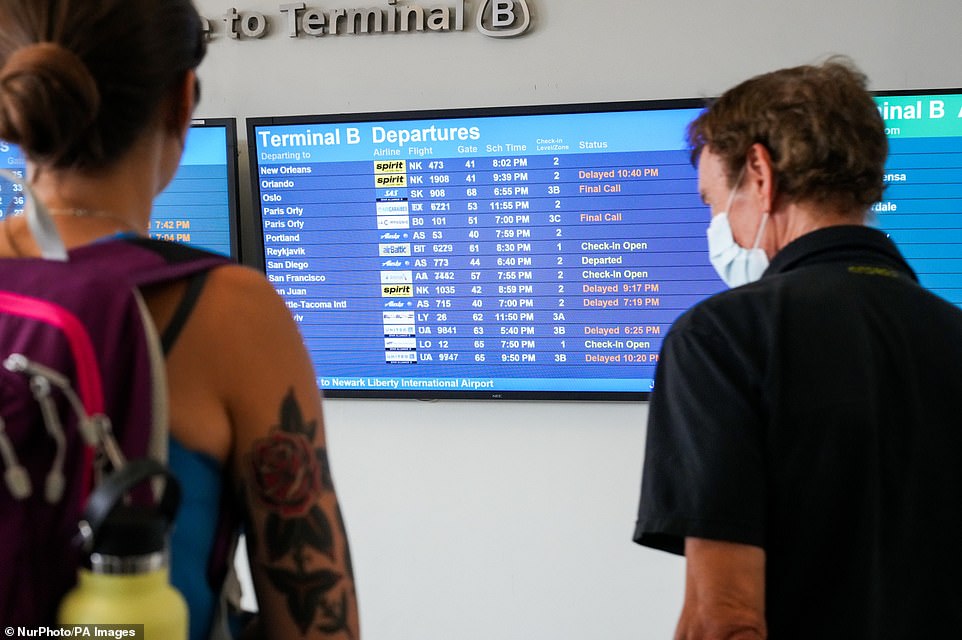 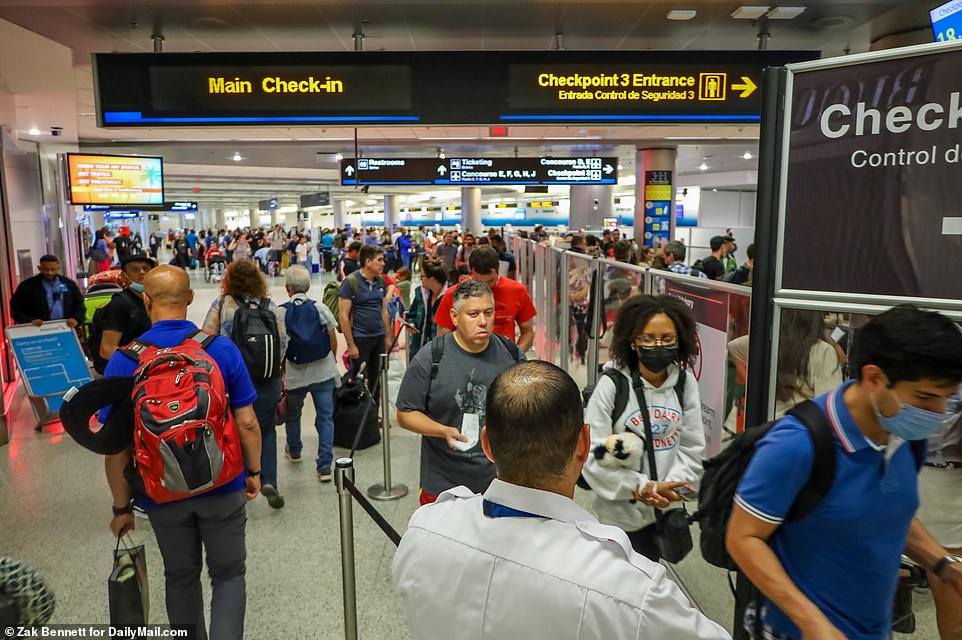 Chaos continues to swamp U.S. airports amid the busiest travel weekend since the pandemic with more than 600 flights canceled and nearly 2,900 delayed as of Saturday morning. Pictured: Travelers waiting at check-in at Miami airport Saturday

Fourth Of July travel by the numbers

Here’s how the travel projections for this holiday weekend stack up against last year, according to AAA:

In addition, the Biden administration is blaming the airlines, saying it received billions in stimulus money to keep afloat during the pandemic and should stick to the schedule it publishes.

Buttigieg said earlier this month that airlines had until July 4 to figure out the issues and work out the kinks so travelers can have a smooth summer holiday.

Buttigieg pushed back earlier this week when the head of the trade group Airlines for America blamed the FAA for delays.

‘The majority of cancellations and the majority of delays have nothing to do with air traffic control staffing,’ Buttigieg told NBC Nightly News.

Amid the Fourth of July travel chaos, many are calling on Buttigieg to act rather than give out advice on how to get compensation like he did.

One Twitter user with the handle, The Dude, wrote: ‘Hey Pete … maybe, as Secretary of Transportation, you should be meeting with FAA, major airlines and other key folk involved – slamming your fist on the table and demanding they work out these issues and a plan to address the problems … not update us on frequent flyer miles.

Another Twitter user with the handle, Limstone Caulk, added: ‘How about, people just want to go somewhere when they actually paid to go?’

Brian Jackson, another Twitter user, said he, too, wanted Buttigieg to be proactive in the situation.

‘You know [as] the Secretary of Transportation you could maybe I don’t know fix the root cause of the delays so no one would need a refund and would actually get to their destination?’

Another Twitter user with the handle Pantazopopulos wrote:  ‘How bout you actually find out the reasons the airlines are having issues and see if there is a way to help, I mean, if you’re not busy, since you are Transportation Secretary.’