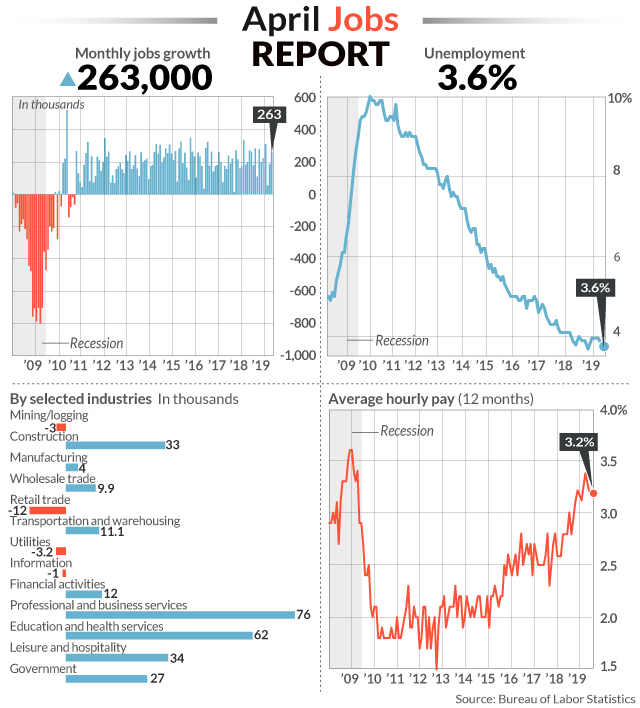 Hiring was strong for the second straight month in April and unemployment fell to a new 50-year low, easing concerns that a slowing global and U.S. economy could dampen job growth.

Employers added a booming 263,000 jobs, the Labor Department said Friday, beating forecasts of 190,000. The unemployment rate fell from 3.8% to 3.6%, lowest since December 1969, but that was because nearly 500,000 Americans left the labor force, which includes people working and looking for jobs.

Another positive: Payroll gains for February and March combined were revised up by a modest 16,000.

It would be hard to ask for a more favorable report. The labor market continues to defy expectations of a slowdown amid worker shortages. And annual wage gains were solid but didn’t climb higher, providing confidence that inflation is likely to remain subdued in the near term and keep the Federal Reserve on hold.

“This should allow the Fed to hold pat at neutral and help extend the current expansion,” Bank of America wrote in a research note.

Meanwhile, the research firm estimated that early federal government hiring for the 2020 census would increase employment additions by up to 10,000. High Frequency Economics forecast a bigger boost of about 20,000 from census-related hiring. Those jobs, however, are temporary. With 11,000 federal jobs added last month, census hiring “did not appear to have been a significant factor,” High Frequency economist Jim O’Sullivan says.

It would be hard to ask for a more favorable report overall. The labor market continues to defy expectations of a slowdown, despite worker shortages. And annual wage gains were solid but didn’t climb higher, providing confidence that inflation is likely to remain subdued in the near term and keep the Federal Reserve on hold as it debates whether its next move should be a rate hike or cut.

“This should allow the Fed to hold pat at neutral and help extend the current expansion,” Bank of America wrote in a research note.

The job gains signaled a healthy economy, pushing the Dow Jones industrial average up over 200 points to 26,513 in afternoon trading on Friday.

The bigger question is how much slowing economic growth and worker shortages will crimp hiring this year.

The European and Chinese economies have been sputtering, though the latter recently has shown signs of improvement. And the effects of U.S. government tax cuts and spending increases, which juiced the economy in 2018, are set to fade this year.

Hiring is also likely to slow because the 3.6% unemployment rate is expected to fall further, making it even tougher for businesses to find qualified workers. Monthly job growth averaged a surprisingly strong 223,000 last year and 205,000 so far in 2019. But economist Leslie Preston of TD Economics expects the average to dip below 150,000 the rest of this year.

“Payroll gains can’t continue at this pace,” economist Ian Shepherdson of Pantheon Macroeconomics wrote in a note to clients.

Pay increases generally have topped 3% since last year as employers compete for a shrinking supply of workers. But they haven’t ratcheted higher in recent months, helping the Federal Reserve remain on hold as it waits to see if now-subdued inflation starts to pick up, forcing it to raise rates again, or if the economy weakens enough to prompt a rate cut.

Industries that are hiring

Manufacturing, which has been hurt by the global slowdown and U.S. trade standoff with China, added just 4,000. And retailers, beset by a long-standing shift by shoppers to online purchases, lost 12,000 jobs.

The share of American adults working or looking for jobs fell for a second month to 62.8% from 63%. From September to February, the figure had climbed steadily, reaching a six-year high of 63.2% as the vibrant labor market attracted more discouraged workers, disabled people, seniors and others on the margins.

Notable drops in March and April could mean labor force participation is resuming its longer-term decline as baby boomers retire. A smaller labor supply could push up wages and inflation, possibly leading the Fed to eventually raise rates.

There was another soft spot. The average workweek dipped to 34.4 hours from 34.5 hours in March. The figure was at 34.5 hours for almost all of last year before wobbling in early 2019. A sustained decline in the hours of existing employees could foreshadow a slowdown in hiring, but a one- month drop could be a blip.

Amazon, one of the largest private employers in the U.S., said it will raise the minimum wage for its U.S. workers to $15 an hour in November. (Oct. 2) AP

Heavy Rains Cause Havoc From Michigan To Arkansas.