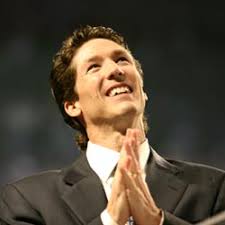 False minister Joel Olsteen for instance in the above photo who by his own admission is not versed in the word of God, and does not know the Bible, and others like him teach the false doctrine of salvation by grace through faith only. The question needs to be asked of him and so many others who aren’t qualified to teach the Bible, because they don’t live by it nor do they have any real knowledge of the Bible, why are you teaching the Bible?

2Preach the word; be instant in season, out of season; reprove, rebuke, exhort with all long suffering and doctrine.

3For the time will come when they will not endure sound doctrine; but after their own lusts shall they heap to themselves teachers, having itching ears;

4And they shall turn away their ears from the truth, and shall be turned unto fables.

There are two prominent doctrines that are being taught in the world today, the most popular of those doctrines originates from a false Christianity  which emphasizes the salvation by grace through faith only false teaching. A false soul destroying doctrine which teaches that a verbal acceptance of Jesus Christ as ones savior can be defined as repentance and is all that is required to be saved. This doctrine teaches that once a person has accepted Jesus Christ as their savior they are instantly acquitted of all sins past, present, and future.

This doctrine was established in the third century when Emperor Constantine  essentially abolished the doctrines of  Christ, which has always been based on obedience to the commandments and the word of God as a whole.This doctrine because it is centered around   faith and  grace and nothing else ( Notice Romans 6:1-3, Romans 6:14-16,James 2:20,24,26,  Jude 1:4) while rejecting the commandments, cultivates hypocrisy, and  rebellion against the commandments and word of God as a whole. Which when followed can and will  result in harsh judgment and condemnation when judged.

The other doctrine which is taught by the true churches of God emphasize obedience to the commandments and the word of God as  whole  which is certainly an absolute requirement and is necessary to be considered repentant and or righteous in the eyes of God. But they also teach that mankind as whole is not being judged now and will ultimately be reconciled back to God in time Notice Acts 17:30-31. The danger with this doctrine is it gives people that hear it the impression that they are not being held accountable for their actions now. I believe that mankind as a whole will be reconciled back to God but I also understand fully that the wicked, ungodly, and the hater of God will be punished for their evil. A fact that is powerfully and clearly outlined in scripture Notice  Deuteronomy 7:10, Psalms 21:8-9, Malachi 4:1,Matthew 13:49-50, Romans 2:6-10, Romans 6:21-23, Revelation 21:7-8 .

When you tell a man or woman that there is no accountability for their sins. Guess what happens?  That man or woman sins even more because they have no fear of consequences or reprisal for their actions.  If you tell them that there is consequence for sins they will still sin maybe reluctantly, but they will still sin  in many cases  because that is a part of  mans sinful, carnal nature. But if you tell him or her that they will not be held accountable at all they will sin even greater. That is like giving a person the green light to go out and behave in any way that they deem right in their own eyes. Teaching a doctrine that mankind as a whole will be reconciled back to God no matter how they behave in this life is simply wrong  and not consistent  with scripture.

Now  a slight but very critical doctrinal error does not dictate or determine that these are not the true churches of God because they most certainly are as long as they are teaching and obeying the commandments and the word of God as a whole. A slight doctrinal error is quite a bit different than teaching a doctrine that is the complete opposite of what Christ taught and what the Bible teaches, which is what  the salvation by grace through faith only  and Sunday observance doctrine, traditional Christianity teaches.

The problem is both  doctrines  can and will promote rebellion by essentially saying all is well, you don’t have  to be concerned about anything, your actions no matter how abominable and rebellious will never be held against you. And both doctrines have their own way of saying  or conveying this. Tell a man or woman that there is no accountability for sin and that man or woman is merely going to view that as a green light to do what the Bible clearly forbids us to do, sin, and sin is the transgression of the law 1 John 3:4, and the wages of sin is death Romans 6:23.