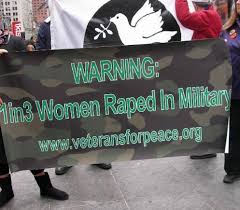 There has been a steady rise in armed services sexual assaults against female members of the armed services,  a very disturbing trend that should have been corrected as soon as it started. No person man, woman or child, should ever be violated in a sexual manner in any way. And  how the situation has gotten so out of control makes you wonder exactly who is in charge and what are they doing to curb this type of abuse? Why with the long history of military sex abuse hasn’t anyone come out to powerfully condemn it until now? The military brass and people in key positions had to know that these things were taking place right up under their  noses.

I’m sure many of the female members of the armed services who suffered this type of  abuse  had to make it known to their superiors. So why has no one it appears  even lifted a finger to straighten this mess out up until now? Could this possibly be laying the groundwork in the not to distant  future for a call for men and women enlistees to be grouped with each other as opposed to being grouped with service members of the opposite gender?  And if that is the case could this be a carefully orchestrated ploy by the homosexual and lesbian military leadership and  community in laying the groundwork for furthering their agenda by exclusively grouping homosexual men with heterosexual men, and lesbian women with heterosexual women to push the violated, disillusioned and vulnerable  women, into the arms of  waiting lesbians. Lesbians who in many cases  have been apart of the whole evil scheme and process from the very start. Lesbians  who then play the role of comforter and consoler, and who then work to encourage and fuel even more hate for men, hate that has already been ignited by the rape itself.

The sexual abuse of women within in the military is a despicable and terrible thing that needs to be addressed and corrected as soon as possible, but it should never be allowed to be used by perverse groups to exploit others and to create scenarios where the homosexual and lesbian  military community can use the despicable actions of a  few to dictate,determine and establish, biased pro homosexual policy. A change in policy  that will ultimately benefit their twisted, warped, ungodly cause in the long term. Stamp out sexual abuse of any kind within the military, but not necessarily at the expense of or with a secret agenda and objective to promote or give precedence to one groups twisted views over anothers.

The Dubios And Diabolical Dossier And It’s Outlandishly Unproven Claims.

Norovirus Wreaking Havoc Across The Country.