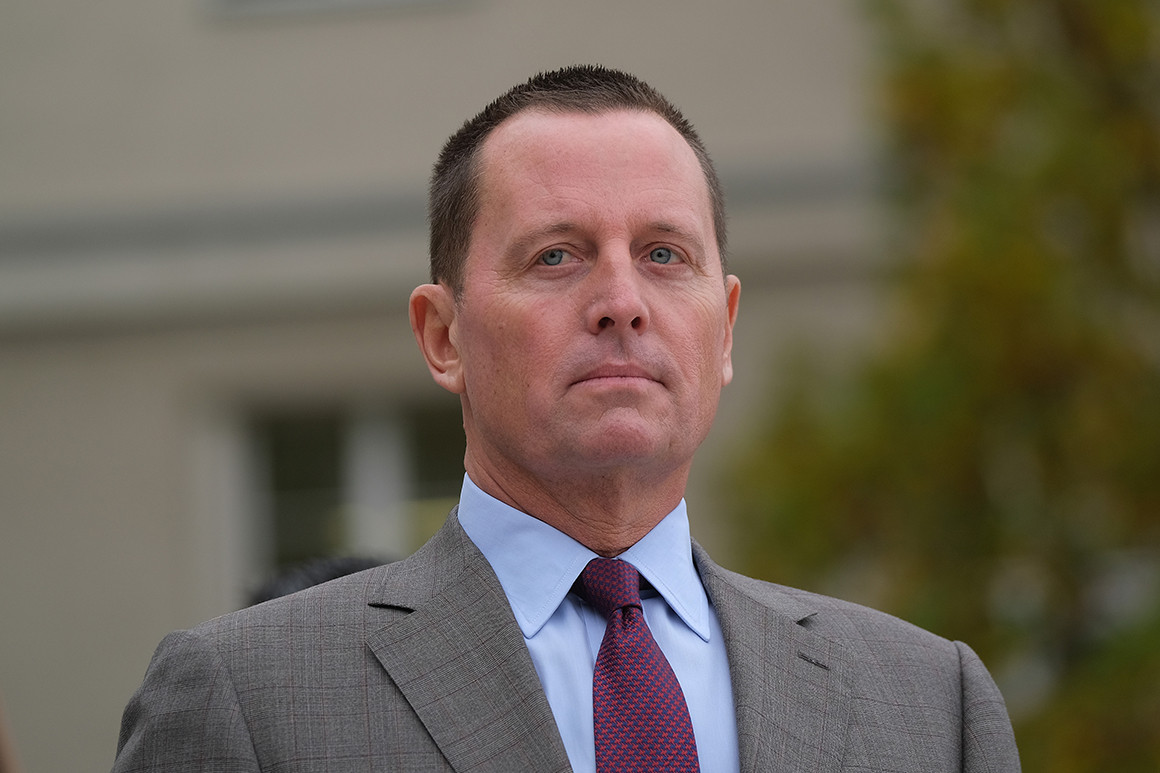 President Trump on Wednesday tapped Richard Grenell, the current U.S. ambassador to Germany, to be acting director of national intelligence.

“Rick has represented our Country exceedingly well and I look forward to working with him,” the president tweeted.

The move installs a fierce loyalist at the commanding heights of the American intelligence community, in the latest example of a newly liberated president seeking to place trusted individuals in highly sensitive posts.

Grenell would take over from Joseph Maguire, who entered the role after the departure of Dan Coats last summer and is required to leave his acting post by March 12.

Under the Vacancies Act, Grenell will not require another Senate vote to serve as acting director. His Senate confirmation as ambassador was contentious, with Democrats pointing to his past comments about female politicians. He was eventually confirmed, in April 2018, by a vote of 56 to 42.

In Berlin, Grenell has been a loyal and outspoken supporter of the president, tangling frequently with reporters on his voluble Twitter feed and often commenting on issues ranging far beyond the traditional remit of an ambassador.

He is also the latest Trump loyalist to take on a new role in the aftermath of impeachment. The president has long been critical of U.S. intelligence agencies, especially in response to their shared conclusion that Russia interfered in the 2016 presidential election.

“Russian or Russian-approved tactics like cyber warfare and campaigns of misinformation have been happening for decades,” he wrote in an op-ed for Fox News.

Grenell has served as a Republican operative, commentator, national security aide and spokesperson for multiple high-profile Republicans, including 2012 presidential nominee Mitt Romney. He served as communications director at the United Nations for eight years under President George W. Bush and across four different ambassadors, making him the longest serving person in that role.

His predecessor as acting director of national intelligence , Maguire, was at the forefront of Trump’s impeachment drama and testified before Congress over a whistleblower’s complaint about the president’s call with Ukrainian President Volodymyr Zelensky. Democrats criticized Maguire for initially blocking Congress from obtaining the whistleblower’s complaint to the inspector general.

“In light of recent reporting on the whistleblower complaint, I want to make clear that I have upheld my responsibility to follow the law every step of the way,” Maguire said in a statement about his handling of the complaint.

During his testimony, Maguire defended the rights of the whistleblower but painstakingly avoided criticisms of the president.

In his announcement of Grenell’s role, Trump thanked Maguire for his work as director of national intelligence and suggested he might be transferred to a different job.

“I would like to thank Joe Maguire for the wonderful job he has done, and we look forward to working with him closely, perhaps in another capacity within the administration!” Trump tweeted on Wednesday.

Maguire became acting director after Coats stepped down in July 2019. Initially, the president wanted to nominate Texas Republican Rep. John Ratcliffe for the position, but after only five days of unflattering media stories and bipartisan protests over concerns about his qualifications, Trump dropped the nomination.

Grenell has been an unusually outspoken and aggressive ambassador, occasionally to the point where he upset his German hosts.

Within hours of assuming his post, Grenell, in a tweet, demanded that German businesses adhere to Trump’s “maximum pressure” campaign against Iran.

“German companies doing business in Iran should wind down operations immediately,” he wrote.

The demand came shortly after Trump said the U.S. was quitting the Iran nuclear deal and re-imposing sanctions on Tehran.

Grenell has long used his personal Twitter account to attack critics or otherwise opine — well before he joined Trump’s team. His use of Twitter, while reminiscent of Trump, has upset U.S. diplomats who say he may be violating State Department rules governing ambassadors’ use of their personal accounts.

It’s not clear how or if Grenell will keep using Twitter if he gets the intelligence position.

The news of his possible assignment immediately set off furious criticism from Democrats, including a blistering statement from the Senate Intelligence Committee’s top Democrat, Virginia’s Mark Warner.

“The president has selected an individual without any intelligence experience to serve as the leader of the nation’s intelligence community in an acting capacity,” Warner said. “This is the second acting director the president has named to the role since the resignation of Dan Coats, apparently in an effort to sidestep the Senate’s constitutional authority to advise and consent on such critical national security positions, and flouting the clear intent of Congress when it established the Office of the Director of National Intelligence in 2004.”

President Obama’s United Nations ambassador, Samantha Power, tweeted that tapping Grenell, “who has politicized every issue he has touched & has contempt for facts, would be a travesty.”

Lisa Monaco, who served as homeland security director in the Obama White House, said, “The intelligence Community is a diverse enterprise; given the wide array of threats and complexity of the global challenges we face – this country and, most importantly, the men and women of the intelligence community, need an experienced national security and intelligence professional at the helm.”

Grenell and Trump by phone on Sunday about 5G and Huawei, although he did not explicitly name the telecom company.

President Trump “just called me from AF1 and instructed me to make clear that any nation who chooses to use an untrustworthy 5G vendor will jeopardize our ability to share Intelligence and information at the highest level,” Grenell tweeted.

The New York Times first reported the news. The White House and Grenell did not respond to a request for comment.

A vocal supporter of gay rights and an openly gay man, Grenell will also be the first openly gay Cabinet member.

During his confirmation hearing as ambassador to Germany, he thanked his longtime partner Matt Lashey “for his many sacrifices, but most of all, for his incredible love and support.”

Is Japan On The Cusp Of A Large Corona Virus Outbreak?