LOS ANGELES — The rainy season drove into California in December with wet and windy promise: soaking rain, snow, dark gray skies and a flash of hope that the drought that has scorched this region had run its course. And then came January — with record high temperatures and record low rainfall.

And now, as the end of the official rainy season approaches — this state gets 90 percent of its water from December through April, most of it in December and January — California is facing a punishing fourth year of drought. Temperatures in Southern California soared to record-high levels over the weekend, approaching 100 degrees in some places. Reservoirs are low. Landscapes are parched and blighted with fields of dead or dormant orange trees. And the Sierra Nevada snowpack, which is counted on to provide 30 percent of the state’s water supply as it melts through early summer, is at its second-lowest level on record.

The federal government has warned farmers for the second year in a row that it would not be providing any water from its Central Valley Project reservoir system. Any hope climatologists had that California would be rescued again by a wet El Niño winter weather system is fading with the arrival of spring. 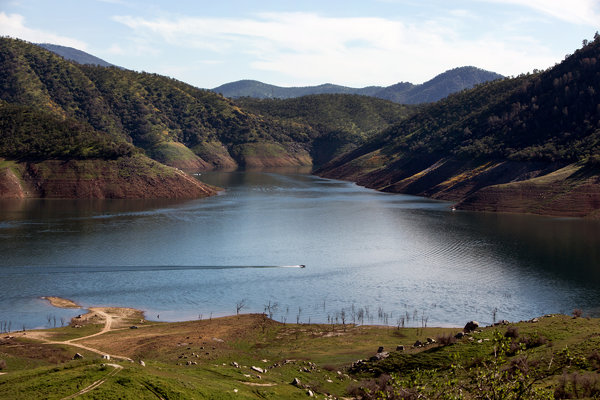 State regulators voted Tuesday to impose a new round of water conservation rules, including sharp restrictions on landscape watering and orders to restaurants not to serve water to customers unless asked. Farmers said they anticipated leaving as much as one million acres fallow, nearly twice the area that went unplanted last year.

Santa Barbara is turning to a desalination plant it built in the early 1990s, but never used, to convert ocean water into drinking water, despite its expense and inefficiency. In communities like Oakland and Sacramento, water districts are reporting increased thefts by people tapping into their neighbor’s faucet or the fire hydrant on the corner.

In one sign of the kind of competition being set off by the scarcity, theMetropolitan Water District of Southern California, a regional agency that provides water for much of the area, authorized up to $71 million to buy water from farmers in the Sacramento Valley, who get it from a state agency. In some cases, the farmers were paid three times as much as in 2010, the last time this was done. With those kinds of prices, farmers say it makes more sense to take the money and leave more land unplanted.

“This is going to affect everyone in the state,” said Paul J. Wenger, the president of the California Farm Bureau Federation. “I can’t think of any part of the state where people aren’t going to be suffering from diminished water supplies.” 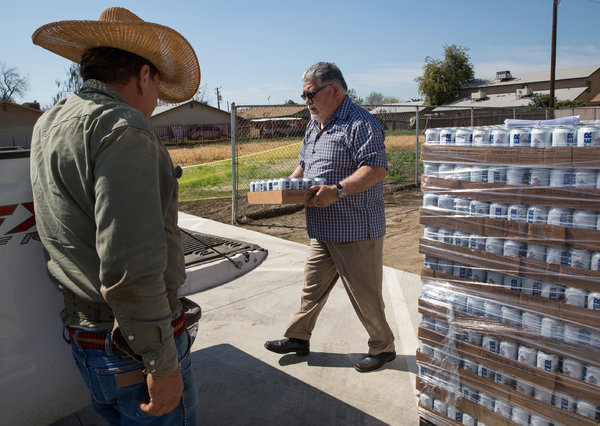 Michael Anderson, the state climatologist, said rainfall had been slightly better this season in Northern California than in Southern California, meaning that reservoir levels in some communities in the north were slightly above where they were last year. But he said the level remained far below the norm. And in critical places like the San Joaquin Valley in central California, in the heart of the state’s farming region, reservoir levels were down over the same period last year — often significantly.

But the main reason for concern is the paucity of the snowpack. The March 3 measurement of the statewide snowpack was the water equivalent of five inches, or 19 percent of the average for that date. That is barely above the record low snowpack measurement from 1991, according to state officials.

“That’s pretty grim,” Mr. Anderson said. “We were hoping for the number of inches to be in the 30s.”

“It looks like we are on our way to the worst snowpack in history,” he said. “Unless we end up with some particularly good snows here in March, we are going to end up with a new lowest rank here.” 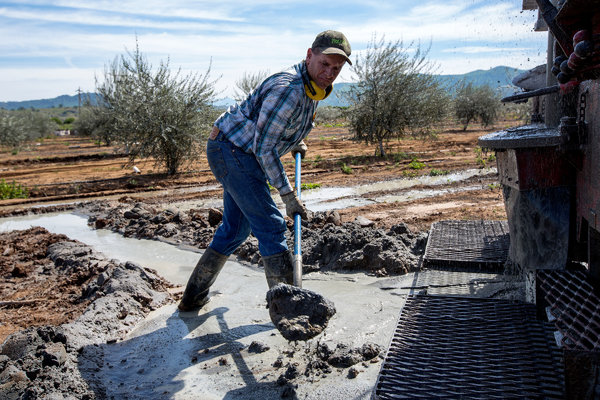 Mark Lawson cleared away sludge while drilling for water in an olive grove in Orange Cove, Calif., last week. Many farmers in the Central Valley are searching for groundwater by drilling new wells. CreditMonica Almeida/The New York Times

The sheets of December rain may have created additional problems, by leading people to take longer showers or to leave the tap running while brushing their teeth. That was compounded by a dry January, which prompted people to water normally dormant landscapes. The State Water Resources Control Board said that while there had been a 22 percent decline in year-to-year water consumption by urban customers in December, that figure was just 8.8 percent in January.

“Last year people thought we were in a regular three-year drought cycle and that it would rain next year,” said Felicia Marcus, the board’s chairwoman. Still, she said, it was a “9 percent reduction off last year, and we have to give credit where credit is due.”

Californians are growing increasingly convinced of the threat: 94 percent of voters in a Field Poll conducted Jan. 26 to Feb. 16 described the drought situation as serious, and 68 percent called it extremely serious. That was far more than the 51 percent who used the words “extremely serious” to describe the drought of 1976-77, one of the most severe in the state’s history. And one-third of voters said they supported water rationing.

This state has long been familiar with the give-and-take rhythms of the rain. But many scientists say the situation has been made worse by rising temperatures: The winter of 2014 was the hottest year on record for California. Last year, the average winter temperature across the state was a record 45.6 degrees, state officials said. This year’s winter average has been 47.4 degrees.

The state is experiencing the worst drought in its history. Find out just how bad the situation is getting and what it means for you.

That is a large reason that the snowpack is so small. High temperatures mean more rain than snow, and rain tends to be absorbed by the ground before it reaches the reservoirs and to melt whatever snow is on the ground. Unseasonably warm weather results in increased consumption as people drink, shower and use water on landscapes more often.

“The normal cyclical conditions in California are different now from what they used to be, and that’s not because the long-term annual precipitation changed,” said Noah Diffenbaugh, a senior fellow at theStanford Woods Institute for the Environment, which just completed astudy of the interaction between high temperatures and low precipitation.

“What is really different is there has been a long-term warming in California,” he said. “And we know from looking at the historical record that low precipitation years are much more likely to result in drought conditions if they occur with high temperatures.”

The developments have stirred more concern among suffering farmers. And their options are diminishing: Several said that after last year, there was less groundwater to draw on, while the cost of buying water had become prohibitive. 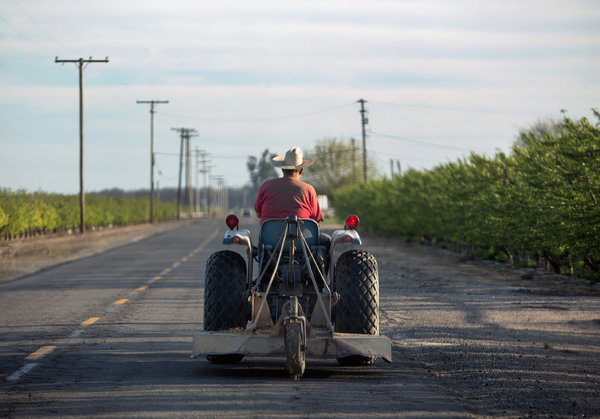 “I’m going to fallow two acres of my land immediately,” said Geoffrey C. Galloway, who has a citrus grove on his ranch near Porterville, in the Central Valley. “Depending on how the season goes, we may let another four go.”

Mr. Galloway, 39, said he counted on income from his grove to support the ranch. He said he was considering whether he would have to give up his land. “I don’t want to lose it,” he said, but “this is the worst it’s been.”

Last year, at least 400,000 acres went unplanted, and farmers reported losses of $2.2 billion, said Mr. Wenger, the head of the farm bureau, who owns a farm in Modesto. “This year we could see easily 50 percent more,” he said. “We are probably going to be looking at well over a million acres.”

Ms. Marcus said the State Water Resources Control Board was moving toward adding new restrictions as well as extending ones that had been due to expire. “The question becomes, ‘What do we need to do to motivate people to do more?’ ” she said.

Pushing for more conservation, the Sacramento City Council voted last month to order faster installation of water meters across the city; the deadline has been moved to 2020 from 2024.

And with paucity and increased prices has come water theft. John A. Coleman, a member of the board of directors of the East Bay Municipal Utility District in Oakland and president of the Association of California Water Agencies, said the East Bay agency wanted to impose serious fines on water thieves for the first time.

“It’s a problem, and it’s becoming more of a problem as the drought intensifies,” he said. “I’m not one who is big on penalties, but this is not right.”

In Santa Barbara, the desalination plant is being taken out of mothballs at a cost of about $40 million.

“Desalination is our absolute last resort,” said Helene Schneider, the mayor. “Unfortunately, given the way the drought is going, we are now at that last resort.”

At one point biased, government funded climate change scientist, referred to the phenomenon as global warming, but after major flooding, snow and cold snaps, they opted to change the phenomenon to climate change because it covers the whole spectrum. Because a warming globe was not conducive to major flooding, snow and cold snaps, in the eyes of many observers. So instead of calling the ever changing weather conditions global warming, they changed it to climate change in an effort to cover their behinds, because this definition seems more reasonable and covers the whole spectrum.

I hope to make it clear to you today, which is clearly outlined by the word of God, that the swiftly approaching wrath and judgement of God on our nation and other nations because of our manifold transgressions. Which include legalizing abominable, filthy, sexual perversions like homosexuality/bisexuality and lesbianism as well as the widespread  promotion and practice of black magic and sorcery, and mass murder in the urban communities.  As well as the practice ofother very offensive sins are the sources of all our weather related issues, epidemics and economic problems.

Let’s examine the word of God to find the truth about the source of all our problems. Today’s Audio Is Entitled Climate Change Or The Wrath Of God Of God? This is a remake of an audio I did several years ago This Audio Was Recorded Thursday January 23, 2014 – The Original Audio was Recorded around 2010.  I mention the Nation of  Ninevah  in this audio  but obviously what I meant was the nation of Assyria and the city of  Ninevah, just speaking a little too fast sorry if I confused anyone.

The Man Made Climate Change Lie And Deception Continues.