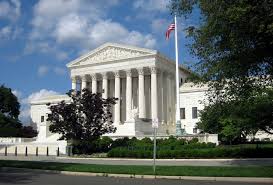 The U.S. Supreme Court has rejected the call to rule on same sex marriage essentially giving the green light for states who have not already legalized it to legalize the perverse ungodly unions. No doubt their decision not to rule is being greatly influenced by the Obama Administration as they pull strings behind the scenes.This decision will put homosexual marriage one step closer to being legalized in all 50 states thereby expediting the wrath and punishment of God on this nation to it’s eventual assured destruction.

Once again America’s courts have dared to defy God by thumbing their noses in his face and once again they will be smitten with bitter cold, wind, snow and ice so much so that economies will be severely impacted. Polar Vortex/Artic Blast after Polar Vortex/Artic Blast effecting  the nation. Legalizing behavior that will ultimately result in the spiritual and physical destruction of millions for practicing and promoting it is something that’s offensive and absolutely unacceptable to God.

Blistering cold, rain, wind,  snow and ice will greatly impact state economies because of the  legalization of the ungodly perversion. And then you will know that God reigns supreme in the Universe, and he controls the weather, and he is very angry with the moral direction this nation is taking, with the legalization of sexual perversions in the form of same sex marriage and homosexual and lesbian adoption etc. Many states economies will be severely impacted, financial losses will be staggering.