Boys Will Now Be Allowed To Use Girls Locker Rooms & Bathrooms By Order Of The Department Of Education. 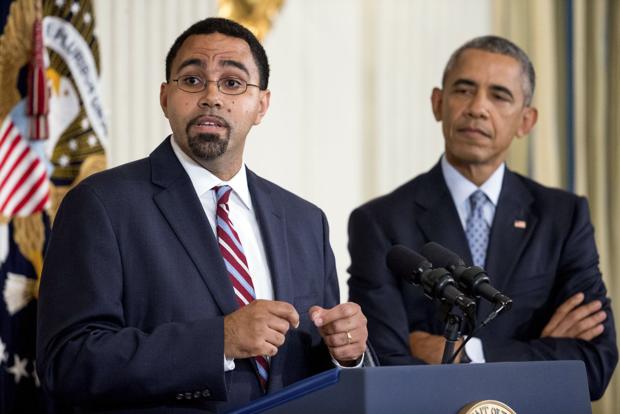 Well, it’s official. (Or at least as official as something can be before a single judge or jury has a chance to look it over.) The Obama Department of Education has ordered a school in Illinois to toe the line on “transgender students” or have their federal funding revoked. The short version of this is that if a boy declares himself to be a girl he will now be able to demand to share the locker room and shower with your daughter, not to mention competing on the girls’ sports teams. From the New York Times:

Federal education authorities, staking out their firmest position yet on an increasingly contentious issue, found Monday that an Illinois school district violated anti-discrimination laws when it did not allow a transgender student who identifies as a girl and participates on a girls’ sports team to change and shower in the girls’ locker room without restrictions.

Education officials said the decision was the first of its kind on the rights of transgender students, which are emerging as a new cultural battleground in public schools across the country. In previous cases, federal officials had been able to reach settlements giving access to transgender students in similar situations. But in this instance, the school district in Palatine, Ill., has not yet come to an agreement, prompting the federal government to threaten sanctions. The district, northwest of Chicago, has indicated a willingness to fight for its policy in court.

The Education Department gave 30 days to the officials of Township High School District 211 to reach a solution or face enforcement, which could include administrative law proceedings or a Justice Department court action. The district could lose some or all of its Title IX funding.

Some of the headlines running around regarding this story are a bit misleading. One Reuters article went with the header of, U.S. orders girls’ locker room access for transgender Illinois student. That’s technically true, but it gives the impression that there’s been some sort of judicial determination. Keep in mind that this was simply a decision handed down by a single office inside one cabinet level department, namely the U.S. Department of Education’s Office for Civil Rights. This decision came from Assistant Secretary for Civil Rights Catherine Lhamon and she wouldn’t have issued the order if the President wasn’t fully briefed and on board with the ruling.

Aside from the questions of propriety and privacy, this ruling also seems to codify the idea that “transgender students” can compete on the sports teams designated for the opposite gender rather than their own birth gender. This just brings back memories of Renee Richards, who “transitioned” from being a man to a woman and then proceeded to crush the competition in women’s professional tennis despite being a mediocre at best competitor in the men’s ranks. Following a successful lawsuit, Richards was actually allowed to play for a few years until retiring and was ranked as high as 20th in the world. Similar questions arose in 2010 with a transgender athlete on the basketball team at George Washington University.

There is no end to the problems which arise from this nonsense and Township High School District 211 may wind up being the one to go to court and obtain some sort of resolution. This debacle started when we began humoring people who were in denial of abject reality because as soon as you start telling someone they can simply be whichever gender they “feel like” that day you are on the path to lawsuits and demands for special treatment. That’s led us down the primrose path to this decision from Obama’s education department and now the parents and the students in any number of schools are going to be paying the price for it. Hopefully a court will restore some sanity to this situation, but I’m not holding my breath for that either.

Well, it’s official. (Or at least as official as something can be before a single judge or jury has a chance to look it over.) The Obama Department of Education has ordered a school in Illinois to toe the line on “transgender students” or have their federal funding revoked.

Canadian Prime Minister Justin Trudeau’s Racist Past Comes Back To Haunt Him:How Will The Liberal Media And Democrat/Liberals Respond?

Is The U.S. Unwillingness To Block The Reprimanding Of Israel By The U.N. Security Council By Veto Proof That Former President Obama Is An Enemy Of Israel?