Provided by The Hill WikiLeaks cancels Tuesday announcement over security concerns
Hillary Clinton campaign manager Robby Mook declined to comment about an alleged remark by the Democratic nominee asking if a drone strike could go after WikiLeaks founder Julian Assange.

Amid speculation about the release of an “October surprise” by Assange, WTTG Fox 5 DC reporter Ronica Cleary published a video clip of her interview with Mook on Monday.

In it, she asked if the report was true and if the comment was made in jest.

Many reporters online have questioned TruePundit, the source of the original report and New York Magazine published a post Monday night which it said explained the “viral rumor that Hillary Clinton wanted to drone-strike Julian Assange.”

“I’m reticent to comment on anything that the WikiLeaks people have said. They’ve made a lot of accusations in the past,” Mook told Cleary.

WikiLeaks tweeted a Washington Examiner report about the video on Monday and on Sunday posted a screengrab from a TruePundit report that said Clinton once asked during a State Department briefing, “Can’t we just drone this guy?”

Clinton manager ‘reticent to comment’ on report about droning Assange 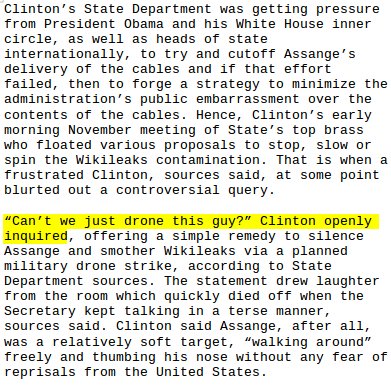 Mook shifted the attention to Donald Trump in his interview with Cleary, claiming the GOP presidential nominee and his allies are using Clinton’s alleged comment as a distraction from the GOP nominee’s debate performance last week. He knocked Trump’s early-morning tweeting about former Miss Universe Alicia Machado.

“Donald Trump and his allies are trying to do everything they can to change the debate here right now,” Mook said. “They’ve got to find some way to change this up and they’re trying to do that by doubling down on conspiracy theories.”

WikiLeaks has published emails from the Democratic National Committee (DNC) hack and Assange was scheduled to make an announcement Tuesday from the balcony of London’s Ecuadorian concerning Clinton. But because of security concerns, the organization will instead host a press conference in Berlin to mark the 10th anniversary of the site.

Tomorrow’s press conf in Berlin proceeds. London speech by Assange has been moved to Berlin due to specific information.#wikileaks10

The Clinton Controversy, U.S. News, World News Did Hillary Clinton Float The Possibilty Of A Drone Attack Against Julian Assange Of Wiki Leaks To Silence Him?

Manhunt For Escaped Convict And Accused Killer Ramps Up.

Homosexual/Pedophile Predatory Deviant Caught With Electrical Wiring And Advanced Circuitry Protruding From His Penis While He Prowled Neighborhoods Rife With Children And Beckoned Them.