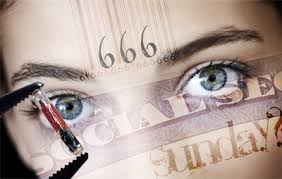 The mark of the beast is often mentioned and talked about in the circles of religious groups and even by casual everyday citizens. But what is the prophesied mark of the beast spoken of  in  Revelations 13:16-18? The Bible says  when it is fully implemented it will be done so by a coming world ruling dictator and government that will require that all people and nations take this mark in the right hand or the forehead.

But this coming prophesied world ruling dictator or the Anti Christ has not yet revealed himself. Although he may very well be on the scene now just lurking in the shadows. But in actuality the Anti Christ  is the whole evil system everything from a great false church, to the false prophet, to the evil political system, to the world ruling dictator who will preside over it all.

The Bible calls it the mark of the beast because it will be  implemented by  this coming world ruling empire, the final resurrection of the Holy Roman Empire, the  Beast and Abomination Of Desolation, the reemergence of the Third Reich or rise of the Fourth Reich if you will. Which will be  the European Union rising to the pinnacle of it’s power, something that is clearly outlined by the word of God.

The Bible says that anyone who accepts the mark of the beast cannot be redeemed and is doomed to be cast into the lake of fire. Some of the churches of God claim the mark will be based on and centered around what day men will worship on, Sunday or Saturday.

That is partially true and one aspect of it,  but there must be some form of identification which proves whether the persons allegiance is really established in regards to which day they worship, or else all one needs to do is just say they worship on Sunday as opposed to Saturday.

That certainly wont be sufficient because it can easily be defeated by just proclaiming allegiance to Sunday while in reality worshiping on the day deemed illegal. This coming  political/religious  system led by the Anti Christ , a type of end time Adolph Hitler or Antiochus only much worse and brutal than the historical figures Adolph Hitler and Antiochus, at the urging of and under the influence of the great false religious  system the Catholic Church will forcefully change times and laws, God’s laws.

Not all the views expressed in the article  (Times And Laws Changed By Rome) are the views of the Truth Plain An Simple.

This evil system will require that all men, women and children, recognize Sunday under the influence of this great false religious institution the Catholic Church, and reject God’s day of worship thereby rejecting the doctrine and commands of the true God and rejecting God.

This is where the importance and necessity of the chip comes in, this will be proof that an individual male or female has sworn allegiance to that day,and in so doing denounce God and Christ.

This will be the true identifying factor,the chip itself and possibly the sequences contained in it will represent  unbeknownst to many, an unholy spiritual union with Satan himself. The tracking system contained within the chip will also insure that  Sunday is recognized and this system is adhered to, a verbal claim or acknowledgement of allegiance will simply not be enough.

This world ruling dictator with a massive, technically advanced military , political system, and a great false church under his command and at his disposal will come to the zenith of his power after conquering many nations.

At which point he will  require that all nations, peoples and tongues, take this mark in the right hand or the forehead to buy and sell, and if anyone refuses they will be put to death. The powerful military, political and religious union is referred to as the beast and abomination of desolation or ( The Evil Destroyer), because they will destroy both physically and spiritually on a massive scale.

It is better to die than to take the mark of the beast. Will you have the biblical knowledge and understanding to spot the false religious system ,world ruler, and world ruling power when all these things come to a head?  Or will you be deceived into worshiping and following, as so many others will, this world figure and false religious system, duped into taking the mark of the beast yourself?

A Radical Liberal Leftist Pope With A Radical Unbiblical Agenda?: The Pope Ask Us To Pray To The Earth For Forgiveness?