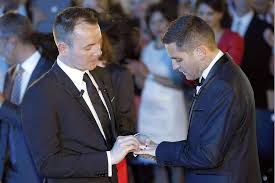 Every once in a while a case comes along where I am tempted to suggest that we skip a few steps in the normal process. Or maybe the vast majority of the steps. This one is a situation where my inclination is to say, let’s just skip the local court case, the appeals and the endless debate in the media and on the blogs. Let’s just pack this one up, fly to Washington, DC, go knock on the door to the Supreme Court, hand it to John Roberts’ clerk and say, Here you go, boys and girls. Have at it.

City officials in Coeur d’Alene, Idaho have informed two ordained ministers that they must perform same sex marriages or face jail time and a fine.

City officials told Donald Knapp that he and his wife Evelyn, both ordained ministers who run Hitching Post Wedding Chapel, are required to perform such ceremonies or face months in jail and/or thousands of dollars in fines. The city claims its “non-discrimination” ordinance requires the Knapps to perform same-sex wedding ceremonies now that the courts have overridden Idaho’s voter-approved constitutional amendment that affirmed marriage as the union of a man and a woman.

“The government should not force ordained ministers to act contrary to their faith under threat of jail time and criminal fines,” said ADF Senior Legal Counsel Jeremy Tedesco. “Many have denied that pastors would ever be forced to perform ceremonies that are completely at odds with their faith, but that’s what is happening here – and it’s happened this quickly. The city is on seriously flawed legal ground, and our lawsuit intends to ensure that this couple’s freedom to adhere to their own faith as pastors is protected just as the First Amendment intended.”

Erick Erickson, predictably (and in this case with justification) is fit to be tied, reminding us of his prediction that you will be made to care. And in this case I think he’s making an important point. Even Rick Moran – who takes about as secular of a path to truth as you’re likely to find – describes this as a case where the city fathers have trampled on the Constitution.

Even for those of us who hold the unpopular view that the government has no business demanding a permission slip (read: license) or charging a fee to any consenting adults to get married, there was always a line which could obviously not be crossed. If you happen to agree that the government can’t stick its nose into the question of who can get married, you surely must also agree that it has no business ordering anyone to perform a marriage. Of anyone… gay, straight or otherwise.

These same libertarian leaning souls should already be enraged that Big Brother is forcing people to bake cakes, take photos or prepare plates of finger sandwiches for events where they do not wish to do business. But that battle – at least for the moment – seems lost. And in the case of the Hitching Post, one could almost make the argument that since Uncle Sam had determined that all facilities for ceremonies – you will recall the situation with Liberty Ridge Farm – must be open to everyone, then the chapel in Idaho might have to let such couples marry in their chapel. But to tell the pastors that they must perform the service?

Surely this is a situation where the courts can draw a distinction between the business and the person performing the service, because the service in question is somewhat unique. The Knapps are not bakers or photographers or caterers. The “business” they engage in involves more than pots and pans, rolls of film or fancy plates. Their “job” is, as I said, somewhat unique because in the course of practicing it, they are simultaneously engaging in the free exercise of their religion. And the phrase the free exercise thereof should be ringing a bell. If this idea is held up in the courts, then the First Amendment has pretty well been gutted. But somehow I don’t believe it can be.