In Articles, Politics, The IRS, The NSA, The Obama Controversy, U.S. News 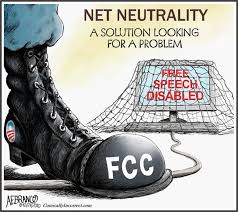 The FCC I’m convinced forced and or manipulated by the Obama Administration has just implemented steps to regulate the Internet. Under the guise of insuring a fairer more accessible internet for all citizens. The FCC has just insured that big companies can’t have access to faster lanes  on the internet. Or is this really the original intent? The question is why tamper with something that wasn’t broken to begin with? Why is the FCC now meddling in matters relating to the Internet?

This in my opinion  wreaks of suspicion and appears to be the beginning of a plan by the Obama Administration and the Democratic/Liberal party  to control and censor what’s broadcast on the Internet. In other words this is simply a power grab and a plan to silence free speech.  Especially as it relates to exposing, or disagreeing with policies, lifestyles and or behaviors, that are championed by the Obama Administration and the Democratic/Liberal party. By deceptively and dishonestly claiming  that Radical Islamist recruitment of supporters, and other scenarios like cyber hacking, etc, by way of the internet and social media, as a means to justify it.   But in reality the real objective being to silence opposition to his and his political parties twisted goals and agenda. Ultimately even labeling the truth as confirmed by the word of God, hate speech, and therefore seeking to ban it.

You must understand that this President plans ahead, and is an opportunist and a twisted visionary for his perverse, immensely destructive agenda and world view. And so is Satan.  A man who is wise in his own eyes and prudent in his own site Isaiah 5:20-25.  Most of his present actions and decisions are motivated by a vision of what he believes (no matter how destructive it is) the future should be. He works toward the establishing of that agenda piece by piece, step by step. The enactment of laws here,  the passing of legislation there. Until he has subtly, covertly, put all the pieces of the puzzle, the pieces of his destructive agenda together. While  unbeknownst to the majority of the American public. Under the guise of a proactive, concerned  President, who is driven to do what’s right and what’s best for America and it’s citizens. He has sought to control virtually every major, influential and impactful  facet of government, for his twisted objectives and agenda since he secured the office of the President. From the NSA,IRS, to The Man Climate Change Scam,etc. “The Man Made Climate Change Scam which has been proven wrong and debunked so many times I’ve  lost count”.

The Man Made Climate Change Scam which is just a money making scheme to generate immense wealth to line the pockets of greedy, perverse men. So they can lavish themselves with luxuries and buy more political influence, power and control. A scam and scheme that will yield immense power and control to the EPA which will in turn use that power and control to bully and force citizens,businesses, organizations and corporations,etc. And ultimately the world community, to bend to the will of the progressive/regressive/liberal/homosexual movement and agenda. To assist in furthering their twisted, ungodly, spiritually,physically and nationally, destructive  goals. And even Healthcare which may ultimately over time reveal itself as a diabolical plan to help further his and the Democratic/Liberal parties twisted agenda for complete control of government and the American people. To insure the furthering of their ungodly, perverse agenda.

And I’m convinced the Internet will be no different. I implore moral men and women, of good will in government, to fight fiercely to turn back everything this President  has done in relation to Internet regulation. Because if not you put him in a position to promote the voices of individuals with perverse destructive agenda’s. And to silence the voices of those who seek to expose individuals like this man and others for who and what they really are. God haters  who promote and support, a perverse,  destructive, Satanic agenda.

He is obviously  laying the ground work for his political party and possible successor as well, who  after he leaves office will simply seek to pick up where he left off. Working to further their agenda, even if it means censoring or stifling free speech. That’s what they will try to do. Ultimately using Net Neutrality as a means to accomplish it. This President has proven time an again to be nothing but a chameleon, who changes his stripes and colors to deceive as a means to accomplish his twisted goals. With the ultimate objective being to further his twisted Satanic world view and agenda.

As has been the case with his previous, deceptive, covert efforts, in manipulating the NSA to gather sensitive data about unsuspecting American’s and American allies. As well as establishing control over and manipulating the IRS to deny tax exempt status to conservative and religious groups. But at the same time allowing tax exempt status for liberals and progressives/regressives. All of which  was an obvious attempt at seizing power and control of  the IRS and NSA. And to insure the  promotion and furthering of he and his parties twisted, destructive views. It was such an obvious power grab that a child could see it. I’m not sure why the majority of the American Public couldn’t.

Now he wants to play concerned,impartial, unbiased, internet policeman?! And based on his previous  actions  are we to believe his assertion that in reality he is doing it exclusively to protect the rights of American citizens? The truth of the matter is he seeks to silence sites like this that have been exposing him and his perverse, ungodly agenda, before anyone else knew what his real motives were.  As well as other sites  and individuals who have exposed facets of his twisted agenda.

I’m convinced that Net Neutrality was implemented as a power grab in the same context of other previous failed power grabs by this President and his corrupt administration. If conservative politicians and officials, or politicians in general, sit idly by and allow this President to implement a future policy of censoring and stifling Internet Free Speech. I honestly don’t know what real purpose you serve.

It may seem innocent and well meaning from the outset. But ultimately if allowed, I’m convinced, it will reveal itself as just another diabolical scheme by this President and his corrupt administration and a corrupt political party in acquiring complete power and control. In the same vain as his previous failed attempts at control of the NSA, IRS, etc. Keep your eyes on this man! Watch and counter his attempts at seizing absolute power and control! I’m convinced his plans are much more diabolical than many realize. Very charming and clever in his own mind.  As was the serpent that beguiled Eve.

Isaiah 10:5-7: O Assyrian, The Rod Of Mine Anger, And The Staff In Their Hand Is Mine Indignation.